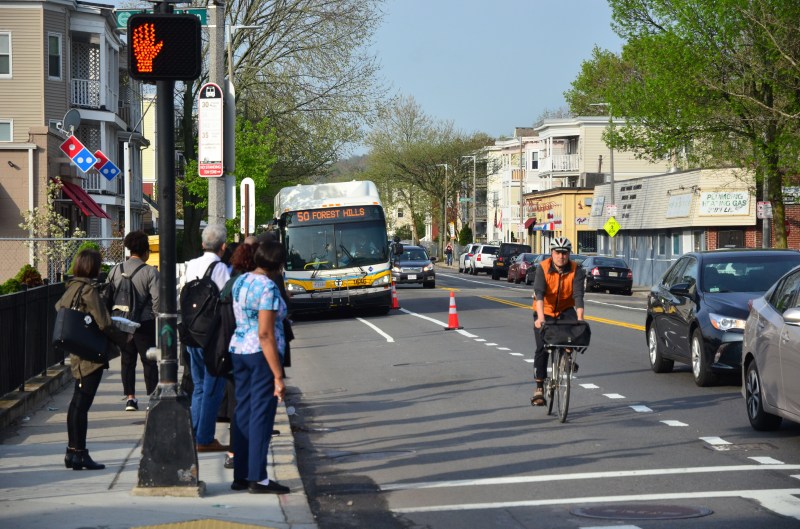 Bus travel times dropped 20 to 25 percent during the morning rush thanks to the Washington Street bus lane, the city reports.

It doesn’t take much money to make riding the bus a lot more convenient. With little more than orange cones, Boston set up a bus lane on one of its most important but congested bus corridors — and it worked wonders.

At first, the city let the one-month bus lane experiment on Washington Street expire, frustrating bus riders and advocates who expected the test run to transition seamlessly to a permanent improvement.

But the administration of Mayor Marty Walsh quickly came around and announced yesterday that the bus lane will be back beginning June 18. The city won’t wait for permanent markings and signage to reinstitute bus priority each weekday morning from 5 a.m. to 9 p.m.

The bus lane speeds up trips for six bus routes carrying 19,000 daily trips on Washington Street in the Roslindale neighborhood, connecting to the Forest Hills Orange Line Station. Previously, the curb lane was reserved for parked cars during rush hours and buses operated at a snail’s pace in general traffic, weaving in and out of rush-hour congestion at every stop.

Beginning in early May, the city converted a parking lane during the morning rush hour to a buses-and-bikes-only lane using orange cones. Bus riders and cyclists got a taste for how much better their commute could be.

According to survey data from the City of Boston, 94 percent of bike and bus riders said they wanted the pilot made permanent.

Andrew McFarland of the advocacy group LivableStreets Boston hopes to see that success replicated elsewhere. Boston has identified a number of other streets as high-impact locations for dedicated bus lanes.

“This is all the more reason the city should looking at the other four or five corridors that are really congested,” McFarland said.