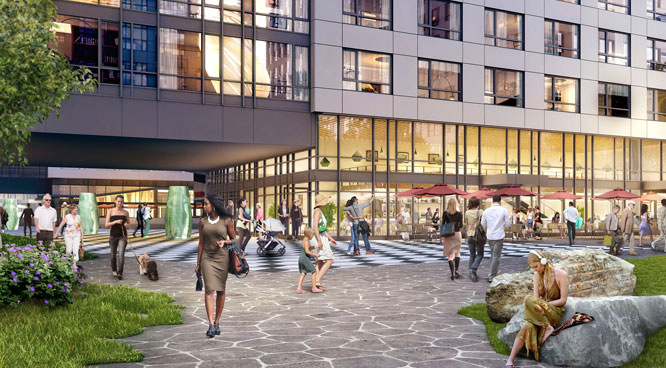 If San Francisco had not allowed Angelo Sangiacomo to build the maximum number of allowable units (1900) on the former Trinity Plaza site, his company would not have been able to invest millions of dollars building a 55,000 square foot supermarket. And without that housing density, and other new housing developments in the area, it is unlikely Whole Foods would have opened in that long troubled location.

Opponents of increased housing density– who are often those also raising alarm over retail vacancies– typically claim that new housing increases traffic, reduces parking and threatens neighborhood “character.” But in this era of online shopping, a neighborhood’s retail character is more dependent on foot traffic than ever before.

Housing provides the most constant and reliable source of the foot traffic small businesses need. Increasing housing along or near commercial corridors is important beyond addressing the lack of housing supply that has driven up prices;  such housing provides the customer base that  neighborhood retailers in the post-Internet era need to survive.

Unfortunately, housing’s central role in addressing the retail crisis has been downplayed as other ideas are advanced. For example, Supervisor Aaron Peskin, long a champion for  small business, believes the city can fill retail vacancies by imposing a vacancy tax.

Peskin asked the City Attorney to explore such a tax last July. Nothing has moved forward. But the idea remains alive, as mayoral candidate Mark Leno announced support for a vacancy tax to “prevent blight” at a SF Progressive Coalition Mayoral Forum last week.

The problem with a vacancy tax is that a surcharge large enough to impact owner conduct would be struck down by the courts. Guaranteed. In California such taxes would be found to violate Proposition 13. Courts  would also  find such taxes to constitute a “taking” in violation of the Fifth Amendment.

These legal hurdles explain why proponents of vacancy taxes cite Vancouver, Canada rather than any American city as a precedent. Legal obstacles also explain why no action has been taken since Peskin raised the issue.

Instead of talking about a vacancy tax that will never achieve its goal,  San Francisco and other cities need to increase housing density on or near key commercial corridors where retail vacancies proliferate.

Some media mythology says that Mid-Market is awash with tech workers whose influence has brought upscale businesses to the area. Those who actually walk through Mid-Market find a different experience. There is surprisingly little positive foot traffic between 8th and 6th Streets in the heart of Mid-Market; likely no more than before Twitter’s arrival in 2012.

Mid-Market’s nearly fifty years of retail failure, which I discuss in my book The Tenderloin: Sex, Crime and Resistance in the Heart of San Francisco, is due to a lack of positive foot traffic. And the post-Twitter years prove that adding tech companies, WeWorks and other office uses does not do much to help retail.

It is housing, not offices, that brings residents to nearby restaurants, cafes and other retail uses closer to home. Residents are around on weekends and evening when workers are gone, and businesses need weekend business.

It’s striking that the popular Equator Coffees & Teas in front of the Warfield Theater is the only one of its many locations  closed on Sunday. Housing in the area will bring the nearby customers needed to support Sunday openings.

I helped put together the deal to rebuild Trinity Plaza years before anyone imagined a new tech boom because at the time we saw a major new housing development at 8th and Market as key to bringing foot traffic to the area. And now with other Mid-Market housing developments under construction or soon to be, housing will provide the 24-7 activity that the area’s retail businesses have needed for decades (1075 Market is already completed, the Shorenstein project has begun, 950-974 Market begins in two weeks, and the Tidewater project on the former site of The Hall is set to start in April).

Little Saigon’s Southeast Asian restaurants are filled with office workers during lunch. But evening business is a problem. Turtle Tower closes its Little Saigon location at 5:00 pm while its SOMA and Outer Richmond branches stay open until 8 or 9pm.

The only Little Saigon restaurant that does booming dinner business is Lers Ros, which is a destination venue (people take Uber or Lyft to get there as opposed to walking down the street and coming across a restaurant they want to try). Lers Ros stays open until 10:00 pm.

Destination restaurants can succeed anywhere but it requires offering a product not available in people’s home neighborhoods. With Southeast Asian cuisine available in most San Francisco neighborhoods, the other Little Saigon establishments cannot attract outsiders.

Little Saigon’s problem is a lack of nearby housing. People living in such housing would be more likely to want to eat at Turtle Tower for dinner than leave the neighborhood in search of quality Vietnamese food elsewhere.

While most of the Tenderloin is filled with eight story buildings. Little Saigon is primarily low-rise. A 42 unit building has just begun construction on the 700 block of Larkin and TNDC has a planned development (at least five years away) at Larkin and Turk that will also add people. So housing help is on the way. But like Mid-Market, Little Saigon is a case study of how building more housing is essential for boosting small businesses and filling vacant storefronts.

Opponents of housing density think freezing the number of residents in their neighborhood will keep small businesses from being priced out. But the facts on the ground say otherwise.