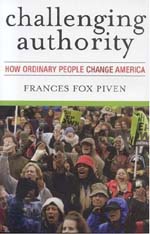 Too often, discussion about the viability of change sprouting from the electoral system is shrunk to fit bumperstickers. Even harder to find is nuanced analysis when the politics of protest—direct action, and mob action become the issue of the day. Challenging Authority: How Ordinary People Change America by Francis Fox Piven offers readers a history lesson of the ways in which progressive change has in the past, actually happened—a complex dance between disruptive populist forces and the formal electoral system.

Piven is one of the Left’s preeminent Political Scientists. Others in academia have done their best to delete the role of protest in social change; she has made a career of writing the common person back into the history. Best known for the groundbreaking Poor People’s Movements: How they Succeed and Why the Fail she asserted over twenty years ago that reform moves best when the action remains direct. Challenging Authority expands on this theme.

The book asserts that disruptive politics have always forced electoral/representative; as well as regional coalitions splinter and realign, making reform possible. This is in stark contrast to the dominant model of party building—unite a large enough mass around a platform common enough to hold—a culprit commonly referred to as the Lowest Common Denominator. For Piven, it is dissensus, not the consensus that is the engine of progressive reform.

The mass direct action of the Civil Rights movement plied pro-segregation Dixiecrats to split from the Democratic Party making it possible for a portion of movement demands to be satisfied. Spot-on is the understanding that one day’s movement victory might become tommorow’s liability. Piven explains:

Moreover, the movement wins what it wins because it threatens to create and widen divisions in electoral coalitions, because it makes enemies and activates allies. The threat of dissensus has inevitable limits, however. On the one side, the mere fact of concessions, even limited concessions, tends to rob the movement of its erstwhile allies. After all, grievances have been answered, so what more do these people want?…The party may succeed in regrouping as a dominant party no longer vulnerable to the threat of dissensus, as the Republican Party did after the Civil War, and as the Democratic Party did after the 1930s. Or it may survive, albeit in a weakened state, as the Democratic Party did after the civil rights movement cost it the support of the South.

While dissensus has its limits, the consensus carries its’ own costs. It is hard to imagine a New Deal without the disruptive actions of the Unemployed Workers Movements willing to physically confront evictors and relief bureaucrats. Roosevelt, wouldn’t have likely come up with the idea on his own. Eminently pragmatic, he responded to a strong mass movement in cold, calculating terms and ended up backing the creation of a social safety net.

Piven applies this logic to the Abolitionist movement as well, noting that even simple oral agitation polarized the pro-slavery coalitions that stretched beyond North-South borders. Piven also credits the insurrections and escapes of slaves as a major catalyst in the end of slavery; a simple truth deleted from many historical accounts. Both Lincoln and Roosevelt were far from natural allies of reform. Lincoln attempted to accommodate slavery and avoided emancipation. Roosevelt signed Executive Order 9066, beginning the internment of Japanese Americans.

One of the most challenging concepts in the book is the concept of interdependent power as a key to movement gains. Piven believes that even within domination, the underdog’s power lies in the fact that the elite really needs her or him. The Boss needs workers to profit, the landlord needs the rent of the tenant, and disruption tends to be bad for business if sustained. True enough, however it doesn’t leave much to work with if one’s movement’s vision lies in transforming this dynamic altogether.

While the world is a much different place that the thirties, the sixties or the 1860s Challenging Authority’s basic premise is directly relevant to today’s activists. Presidential elections on the horizon, progressive forces would do well not to abandon independent disruptive dissent; just as ignoring electoral formations altogether is equally counter-productive. When it comes to the basics of economics and empire, Democrats and Republicans often stand on common ground, differing only on how to manage similar agendas.

Piven’s gift to the reader lies beyond her sharp analysis, eloquent prose, and nuanced understanding of history—she reminds us that the days inbetween the elections, and not just the one’s in preparation for them, count for something. That understanding may be the only thing that can ever elevate American politics from the gutter of soundbites, scapegoating and false promises.