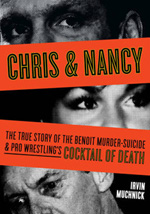 When we think of the most dangerous jobs for young men, professional wrestler does not come to mind. Since wrestling matches are staged, and there is a history of stars like Freddie Blassie and Lou Thesz performing into their 60s, the assumption is that while wrestlers break bones and incur great pain, that the job itself is not life-threatening.

But as Irv Muchnick shows in his new book, Chris & Nancy: The True Story of the Benoit Murder-Suicide & Pro Wrestling’s Cocktail of Death, successful careers in wrestling today often require the ingestion of a dangerous, and often fatal, level of steroids that would never be tolerated in a normal business. Wrestling impresario Vince McMahon, however, has built perhaps the nation’s only billion-dollar entertainment industry that is unregulated, which means that there is no public entity to prevent wrestlers from taking drugs that lead to their own deaths and even the lives of others. 21 wrestlers died before the age of fifty in 2007 alone, and Muchnick’s book is a powerful call for action.

On June 25, 2007, professional wrestling superstar Chris Benoit killed his wife, his 7-year old son, and then himself in their home in a suburb of Atlanta, Georgia. The murders dominated cable news and some newspapers for days, as questions emerged as to how this awful event could have occurred.

Irv Muchnick, a frequent contributor to Beyond Chron and the author of Wrestling Babylon, set out to explore how Vince McMahon’s World Wrestling Entertainment (WWE) handled one of their star performer’s murdering his family. What he learned was that the WWE likely knew Benoit was a murder before holding an event honoring him — said honor implying that Benoit and his family had been victims of a killing by others. Muchnick also shows how the WWE then did everything possible to spin Benoit’s actions as completely unrelated to his massive doses of steroids that he — and most other WWE stars — are virtually compelled to use to perform their jobs.

It is a very tawdry story, which Muchnick reveals and proves in great detail, likely due to the WWE’s threats of litigation against him. Muchnick cites emails, cell phone calls and other transcripts to prove his case against the WWE beyond a reasonable doubt, which he succeeds in doing.

Muchnick’s makes no secret of his outrage at the steady stream of deaths of young wrestlers under pressure to use steroids both to create a “bulked up” appearance and to withstand the unbelievable daily grind of matches. Yet at the same time he adopts a somewhat cynical attitude toward the willingness of public entities to stop this cycle of drugs and death.

And such cynicism is clearly justified. Nothing has changed since the Benoit murders, and the spiral of wrestlers dying prematurely due to excessive drug and steroid use continues.

Why the inaction? Muchnick implies that legislators view wrestling as entertainment, and do not want to spend political capital battling over regulating pro wrestling. When I read the book a few weeks ago, I concluded that this lack of interest was class based — i.e., pro wrestlers and their fans are overwhelmingly part of the unorganized working-class, and since they were not demanding action, politicians could ignore worker safety.

But in the past two weeks, two significant events occurred to change my perspective.

Second, Congressional hearings revealed that the NFL has long suppressed evidence of increased dementia among former players, and to this day denies the clear scientific links showing that the sport causes lifetime brain damage.

If the public does not care about steroid use in major league baseball, or dementia in pro football, why would politicians get exercised over steroids in the fake sport of pro wrestling? If the early deaths of former NFL players do not bring change, why would we expect Congress to address the deaths of pro wrestlers little known outside their fan base?

Muchnick provides a great public service in exposing what he describes as the WWE’s “Cocktail of Death.” Now its up to wrestling fans to demand action, or else continue seeing their heroes die early from avoidable deaths, often ending up destitute after enriching the McMahon’s.