Blame Politicians for Homelessness and Hunger in U.S. 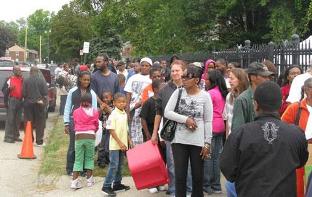 Each year, from Thanksgiving to Christmas the media details homelessness and hunger in the United States. We hear of people forced into shelters due to illness, tragic accidents and other unforeseen life events, with requests for donations sought to help these victims of hard luck. But for all their good intentions, these stories omit any connection between the homeless individuals described and politicians opposing spending federal money to build low-cost housing and reduce homelessness. The same holds true on the stories this season about hunger: long lines for free food are divorced from Republican efforts to cut food stamps, and the Party’s unanimous opposition to raising the federal minimum wage. While the media’s highlighting “the unfortunate” during the holiday season raises vital private donations to help their needs, letting the politicians responsible off the hook perpetuates the crisis.

I was working in the Tenderloin in 1982 when homelessness emerged as a national issue, and never in the past thirty years has the problem been further off the national agenda. And one reason is that the media’s holiday season accounts of the hungry and homeless provide no political causation or explanation for their fate.

Widespread visible homelessness emerged soon after the Nixon Administration decided in the mid-1970’s to get the federal government out of the affordable housing building business. President Reagan’s 1981 budget dramatically slashed HUD spending, and the federal government has served a smaller percentage of those needing subsidized housing ever since.

Reagan and the two Bush presidents spent the bare legal minimum on affordable housing, and Clinton’s end of first term budget included no new federal housing subsidies. Clinton’s last two budgets increased the number of housing vouchers, but even Obama’s “dream team” of affordable housing advocates at HUD were not given the money necessary to meaningfully reduce homelessness.

Until the George W. Bush years, there were Republican Senators and Congress members who backed affordable housing as “brick and mortar” job creators. But for the past decade Republicans have vigorously opposed any expansion of the nation’s low-cost housing supply, and the Party’s 2012 convention backed HUD’s abolition.

But you won’t read or hear about any of this political opposition as the media chronicles its “hard luck” victims. Instead, we’ll hear about people who lost jobs due to illness or traffic accident, or who were plunged into homelessness due to the death of a spouse, or costly medical treatments.

Individual decisions and life events do cause some to be homeless who otherwise would not. But the United States has millions of ill-housed people for one reason: unlike other western nations, we do not provide government assistance to the vast majority who cannot afford to pay private market rent.

Obtaining affordable housing in the United States is like a game of musical chairs in which 50 people surround ten seats. The acute shortage of seats ensures that most will not get to sit for years regardless of their work ethic, sobriety, or desperate desire for housing.

The biggest investment related to low-cost family housing in recent decades was the HOPE V1 program. It spent billions of dollars demolishing over 100,000 public housing units and made family homelessness even worse. Only a small fraction of the units demolished have since been replaced with low-cost housing.

I won a national Project Censored award in 2001 for writing about how homelessness was ignored in the 2000 presidential election; with a few name and date changes, my story could have won similar honors after the 2004, 2008 and 2012 contests.

The media is also busy describing long lines at soup kitchens. Politicians are also given a pass, as hunger in the United States is attributed to “tough economic times” and more “hard luck.” But as the Center for Budget and Policy Priorities reported, “in 2011, states implemented some of the harshest cuts in recent history for many of the nation’s most vulnerable families with children who are receiving assistance through the federal Temporary Assistance for Needy Families (TANF) block grant. The cuts affect 700,000 low-income families that include 1.3 million children; these families represent over one-third of all low-income families receiving TANF nationwide.”

In other words, politicians cut benefits to very poor children whose already meager grants left them going to bed hungry in the richest nation on the planet. Yet the media will not identify any of the politicians who voted for these cuts, again making it easier for them to vote to increase hunger in the future.

Do people need to contribute to food banks and soup kitchens to make up for the government’s failure? Absolutely.

But that’s no reason for the media to give politicians causing such human suffering a pass. And those claiming that connecting politicians to hunger would unfairly “politicize” fundraising efforts miss the point: we need hunger to be politicized in order to get politicians to fund its reduction.

The media should place the faces of governors, state legislators, and congressmembers who vote to reduce food stamps and aid to the poor adjacent to photos of food lines and seniors picking through trash cans for food. And can you imagine the political outrage if the media reported on the length of daily food lines in its city with the frequency it reports on the meaningless (to most people) Dow Jones industrial average?

The federal minimum wage buys less than it did in 1968 and is currently $7.25 per hour. Yet you will not find a traditional media story in the next month that connects widespread hunger in the United States to politicians opposing minimum wage hikes.