Blacks Not Cursed Anymore, But Gays Still Are 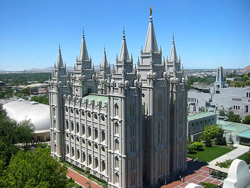 A church that once believed blacks were cursed by god with their skin color and that a man had to have multiple wives in order to get into heaven, has postponed an ex-communication proceeding against a straight member who has come out against Proposition 8, the California measure banning gay marriage.

That measure, which would put a halt to the gay weddings that have been conducted since a recent state Supreme Court ruling gave them the nod, is on the statewide November ballot. The Church of the Latter Day Saints, whose members are known as Mormons, has been urging its adherents in California to vote for the discriminatory proposition. Worse yet, funding the Prop 8 effort to the tune of more than $5 million so far, according to the L.A. Times.

Not every Mormon is overjoyed. Some like Andrew Callahan, a Nebraska Mormon, feel that the church should stay out of secular issues. Callahan joined with like-minded individuals to put up a website, “signing for something,” which takes an opposite view from his church’s: That “each individual should have the civil right to marry the spouse of their choice and to have that union recognized by civil authorities.”

Explained Callahan in a release, “Additionally, I took it upon myself…to write to hundreds of church leaders, primarily middle-level administrators and managers, and asked them to oppose the Mormon church leadership’s bigotry and help defeat Proposition 8. I also sent out cards and e-mails to the lay membership of the church in at least three states, seeking their support to defeat Prop 8.”

Which is why Callahan is in hot water with church officials. It is not known when the church may reschedule a hearing for the rebellious Mormon.

The Church of the Latter Day Saints, like many Christian sects (including Roman Catholic), may physically exist in the twenty-first century, but philosophically it’s more at home in the Middle Ages (even though it didn’t exist back then). Especially when it comes to issues of human sexuality (such as contraception and homosexuality). Science marches forward, but religion often runs screaming in the opposite direction.

The Church of the Latter Day Saints may no longer promote the idea that a man has to be a polygamist in order to get his reward in the afterlife, but it still believes that jesus visited the Americas after he allegedly resurrected from the dead.

It’s crazy, but at least it’s not Scientology.

While forward-thinking individuals such as Callahan are to be applauded for saying no to their church’s refusal to see the error of their ways (as the Mormons did in 1978 when they finally agreed to ordain blacks), the reality is that reforming these traditions is useless.

Humans simply need to get on the wagon and quit their addiction to this opiate.