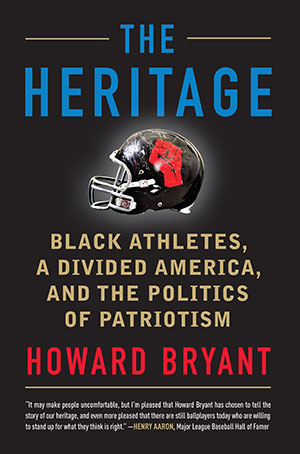 I’ve been a sports fan since the early 1960’s. And it’s harder than ever to justify loyalty to a sports world whose approach toward African-American athletes remains reactionary and often racist.

If you doubt this, you might skip this review of The Heritage: Black Athletes, A Divided America, and The Politics of Patriotism, Howard Bryant’s powerful new book. I’ve read Bryant’s, Shut Out: A Story of Race and Baseball in Boston, and know he pulls no punches in exposing the racism in professional sports. His new book— in the wake of the NFL’s blackballing of Colin Kaepernick for kneeling to protesg police shootings of African-Americans—offers an even harsher indictment.

No Longer the Toy Department

Bryant’s core argument is that prior to 9/11, sports was deemed the “toy department.” When black athletes from Jackie Robinson to Tommy Smith and John Carlos to Bill Russell to Muhammad Ali to Curt Flood raised issues of racism, the response was that sports were an escape from social problems. That changed when 9/11 turned pro sports events into promotions for militarism and local police departments. This new definition of “patriotism” had no place for black athletes complaining about police misconduct, or for any dissent to the agenda of the nation’s military industrial complex.

Post 9/11 sports has 7th innings featuring God Bless America, with the Yankees arresting fans who tried to leave their seats as the recording of the song played. It had the Pentagon paying the NFL for honoring military vets, a twisted recruitment strategy that was not revealed to fans. It has local police departments being honored regardless of how many unarmed blacks its officers killed.

I’ve felt for some time that the majority white crowd at nearly all NFL and MLB games (the Bay Area and NYC are likely exceptions) reflects Trump’s voter base. And that raises the contradiction that underlies Bryant’s book: a white fan base and sports infrastructure (sports talk radio, team employees, the overwhelmingly white broadcasters) supports white supremacy in the voting booth while cheering for African-American or Latino sports stars.

Bryant sees whites resolving this contradiction in a traditionally racist manner:  by crediting African-American athletes for their physical skills while denying equality to their mental abilities. How else to explain why there are so few African-Americans in management in the pro sports that black athletes dominate?

What Bryant calls “the Heritage” is the tradition of top of the line African-American athletes using their platform to speak out for racial justice. The pattern of athletes doing this through the 1960’s and 70’s was then replaced with the model of O.J. Simpson. Simpson disavowed any connection to problems in the black community and was heralded at the time for being able to deliver white customers in ads for Hertz and other companies (Simpson was the only black in those Hertz ads).

Black baseball and football players remained silent about the declining number of black players and managers in the former and the lack of post-career NFL jobs for former players in the latter. Despite all the talk about manager and coaching jobs in both leagues, they remain—like broadcasting booths— overwhelmingly white (I’m always surprised how the Giants get away with four white announcers and the nearly all white KNBR talk show roster that promotes the team).

A new generation of NBA players—Lebron, Dwayne Wade, Carmelo Anthony, Chris Paul—brought back the Heritage. Bryant reminded me that Anthony took a courageous position against the Baltimore police killing of Freddie Gray. This book completely changed my negative views of Anthony (for lack of passing) and now I’m glad he walked away from his NBA career with millions.

Bryant’s true champion is Kapernick. Like Robinson, Ali, Smith and Carlos, he risked his financial future to speak out for African-American justice. The deep hostility to Kaepernick from the white NFL establishment is telling.

I’ve heard sports talk hosts point to Kaepernick’s recent settlement with the NFL and conclude that for them it proves he was “always about the money.” As if the arbitration process governing player disputes had the ability to be resolved for consideration other than dollars.  These spokespersons for billionaire team owners hate Kap for being “uppity,” for having the gall to challenge ownership’s running of the league.

Bryant’s book will make you angry. It might be the last straw in your willingness to put aside politics and enjoy major college sports (which I stopped patronizing years ago due to the unpaid athletes) and pro football and baseball.

But if you want to understand how a white supremacist like Donald Trump was elected President, you need to read this book. Because as Harry Edwards taught me at Cal back in the 1970’s, sports reflects the broader society.