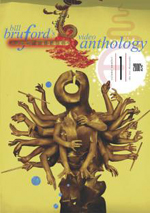 Last October, I was in New York City to see the only U.S. appearance of British drummer Bill Bruford’s Earthworks at the Iridium Jazz Club. His latest group features the incendiary Tim Garland on saxophones, the ever stable Lawrence Cottle on bass and the marvelous young Gwilym Simcock on piano. Apparently, I wasn’t the only Californian in attendance; a certain jazz writer from Santa Rosa had seen all ten shows of Bruford’s five day stand!

After the show, I spoke to Bruford about a possible return to Yoshi’s, and the status of any future recordings. Bruford explained that he would be releasing no new CDs, but rather a two volume DVD anthology; one featuring the current band, and the other featuring the original Earthworks line-up with Django Bates, Iain Ballamy and Tim Harries. Wait no longer, these fantastic DVDs are now here.

Bill Bruford’s Earthworks, a uniquely British institution, have been turning heads on the international jazz scene now for 20 years. The band has consistently offered a platform to the best and brightest young players, presided over by a leader with unparalleled experience as a drummer, composer, and leader. This two-volume Video Anthology splits the band’s career to date into two separate decades, roughly marking its transition from an electronic to an acoustic outfit. Volume 1 represents the work of the later and current “acoustic” editions of the band in the 2000s, and Volume 2 mostly represents the “electronic” origins of the group in the 1990s. Both volumes come with Dave McKean artwork and a 12 page booklet chronicling critical reaction at the time, and all material has been selected and supervised personally by Bruford.

Bruford’s earlier Earthworks DVD, “Footloose in NYC”, was recorded at the now defunct Bottom Line, and featured the first all-acoustic version of the group, with Patrick Clahar on sax, Michael Hodgson on bass, and the delightful Steve Hamilton on piano. His work on “Cloud Cuckoo’s Nest” is just gorgeous, and one of my favorite pieces of that group.

Not to be out done, Bruford continues to unleash one brilliant pianist after another; first with the enigmatic Bates; Hamilton, the amazing Scotsman, and now Simcock, who certainly tickles the ivories on the new song “Youth”. Having seen both Bates and Hamilton on acoustic and electric pianos, it was most refreshing to hear and witness Simcock continuously reach over and pluck his piano wires so percussively.

Footage from the DVDs have been available via Bruford’s myspace page for a few weeks now, and the response appears to be very enthusiatic. For those who want to get a glimpse into the wonderful world and music of a man very often being described as Britain’s version of Art Blakey, these DVDs are a wonderful place to start.

E. “Doc” Smith is a musician and recording engineer who has worked with the likes of Brian Eno, Madonna, Warren Zevon, Mickey Hart, Jimmy Cliff, Paul McCandless, Jack DeJohnette and Bon Lozaga. He is also the inventor of the musical instrument, the Drummstick. He can be reached at http://myspace.com/edoctorsmith