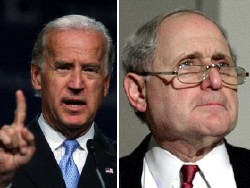 Desperate Obama voters embrace whatever points towards change to believe in. So I perked up when learning voices other than war-happy Bush leftovers are getting President Obama’s ear on Afghanistan. Could our commander-in-chief take command, reevaluate his rash campaign promise to escalate, even defy gung ho warriors keen to duplicate another surge of mismatched troops against phantom insurgents? Despite conceding the corrupt, puppet Karzai government poses a mission threat equal to the Taliban, Gen. McChrystal imagines more visible Yank invaders will shore up disintegrating chaos caused by our presence and a pathetic lackey.

Who leads this “fewer soldiers, more targeted counterinsurgency” pitch? None other than butt of late-night jokes, Joe Biden, spurred by Sen. Carl Levin, his superior in foreign affairs. If Biden Democrats win the argument they lost last Spring, Obama could then rebuff McChrystal’s aggressively leaked ultimatum (surge or utter failure); it’s not as if the 21,000 newbies fulfilled their mission: the guarantee the election wouldn’t be a farce (it was).

That Obama is even reconsidering grand strategy is no small victory. That he may reverse the discredited logic, “we’re losing only because we’re undermanned,” defines a significant shift, a slice of the promised Obama reform on the shelf a year later.

Shockingly, after eight years (mostly in defeat), this is the big White House debate: not peace or withdrawal, not diplomacy or summit meetings, but whether we dare high-risk escalation or swallow Biden’s replay of Bush-Rumsfeld-lite – a leaner footprint pushing “standoff weaponry” like unmanned drones, missiles, assassinations, and secret sorties. After all, such Special Ops maneuvers made McChrystal, now happily one of the “Surgettes,” in Tom Engelhardt’s neat quip: Gen. Patraeus, Sec’y of War Gates, neo-cons not exiled to Siberia, and that born-again Afghan hawk, Hillary Clinton.

I applaud Biden and Levin, not because this anti-terrorism on a shoestring is viable, but as vector, providing glimmers of escape from an unwinnable war of indirection. We’ve stayed this long because of Pakistan (and their nukes) since we can’t (yet) invade that hotbed of Al Qaeda insurgents. Without oil or valuables except opium, Afghanistan is a 40,000 rural, rugged village fortress, thus graveyard of empires since Alexander the Great – unconquered by Romans, Medians, Persians, Turks, Mongols, British, Soviets and our shrinking “Coalition” forces. If war were baseball, the Afghans would be undefeated on their turf, boasting the longest unbeaten streak in history.

And Biden, though celebrated for gaffes aplenty, emerges as improbable progressive hero. Elected in 1973, Democratic stalwart Biden could mentor Obama on the joys of the status quo. Voting to invade Iraq, and late to change, he inanely endorsed splitting Iraq into three nations. Domestically, he’s no populist reformer; his alliance with the worst credit card industry varmints birthed a predatory bankruptcy bill. Chummy with the doltish John McCain, Biden bragged, “I would be honored to run with or against John McCain, because I think the country would be better off.” If I could decipher this absurdity, I’d make fun of it.

Nevertheless, if party insiders can derail the garden variety militarists commandeering foreign policy since Truman, they’d be lights at the end of this long tunnel. Next up, real reform: rejection of deviously lucrative Bush-Cheney misdirection – jacking up defense spending while ordering ill-trained militias against indigenous religious radicals who don’t “lose” battles fought on their terms. It’s all well and good for Obama to throw charisma to the wind, talking up global nuclear disarmament – we should all live so long. Right now, this country must exit two tragically debilitating wars we started, we could never win, and, lo and behold, haven’t and won’t. Really, the fate of our whole empire depends on it.

Understand, Biden is not yet leading a “give peace a chance” foray. These “anti-warriors” defend a nuts-and-bolts, “cost-benefit” middle ground, echoing hawkish George Will: when an unpopular, ill-defined war is unwinnable, and no foreseeable payoff will cover gargantuan costs in lost treasure, lives, or prestige, downsize towards the exit. Not “peace on our time,” this is at least rational, realistic analysis, a giant step from paranoid, leap of faith Cheneyism.

Withdrawal, frankly, requires massive protests on our streets. That goes for Iraq, too. Bush blundering has only reinforced forgotten lessons from Vietnam: arms deliver control and power, not structural transformation, certainly not winning hearts and minds; blanket bombing of civilians induces instability, often inciting both sides and fueling chaos. Yet admitting the wrong force won’t defeat tribalism, let alone terrorism, represents the first step in a national awakening on which our survival depends. Someday, we may denounce the world’s most powerful weapon of mass destruction, the Bush Doctrine. That which befuddled Sarah Palin: a damn-the-devastation nightmare by which the U.S. decimates sovereign countries imagined as threats, while blustering out shameless fictions that dupe born-again politicians and teabaggers.

Yet, in this risk-shy Age of the Status Quo (undermined, I concede, by recently dumping the expensive missile shield absurdity), Biden is our David against much worse Goliaths. His pressure, buoyed by majority American opposition and massive leftwing activism, could change Obama to not transform this less “dumb war” into a bonehead calamity for him and the country. He’d had to fudge on his bizarre claims this is a “war of necessity,” but artful dodging falls well within Obama’s purview. Sensible reversals of bad pledges would regain massively lost trust.

No predictions: new generals routinely get their demands. Not winning an endless war is less precarious than seeming to “lose,” and the right will go apoplectic if the McChrystal-Patraeus gang is “betrayed.” W. showed “war presidents,” however duped and deluded, get re-elected. Yet Afghanistan mishandled already feels like Obama’s Vietnam, a morass defining a one-termer. As Will Rogers quipped about Afghanistan 80(!) years ago, “When you get into trouble so far from home, you’ve got to be looking for it. Rogers also joked, “If stupidity got us into this mess, then why can’t it get us out?”

Were Obama to acknowledge profoundly bankrupt policies, in effect get smart on foreign policy, he’d have to fire the parade of inherited mediocrities who enable discredited Cheneyism. If that means replacing Gates, Petraeus, and the pro-war Hillary Clinton, so be it. Reality is what’s left after the most defiant denial dies: all the king’s men, with sticks, spears or drones, won’t overthrow double-sided modern terrorism: not fanatics in bin Laden’s camp who’ll never give up – nor well-funded, trigger-happy militarists who never met a defeat in war they couldn’t force into a monumental catastrophe.