Better Neighborhoods Plus: Is It Really Any Better? 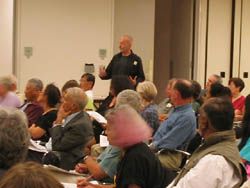 Tempers flared at last night’s Better Neighborhoods Plus Community Workshop where those for and against the proposed Better Neighborhoods Plus legislation exchanged heated words. At one point the Latino/Hispanic Community Meeting Room at the San Francisco Public Library’s main branch resembled more a kindergarten class than a place for public forum as attendees were scolded for raised voices and name calling.

The culprit of such controversy is an ordinance sponsored by Supervisor Jake McGoldrick that, according to a handout, would create high standards for the City’s neighborhood plans by establishing consistent standards for planning and implementation of those plans.

“We want to build a process that creates accountability,” said Dennis Antenore, former planning commissioner, adding that the Planning Department should be held accountable for moneys the Board of Supervisors allots them.

Up until this point, such accountability has been lacking in the City’s planning process, said Calvin Welch of the Haight Ashbury Neighborhood Council. Reading from a page that he typed for the meeting, he said that for more than 25 years, activists have pursued efforts to link the granting of development with public benefits paid for by private developers, and to ensure maximum public participation in planning and approval processes.

“This is the context and objective of the legislation being discussed here tonight,” announced Welch.

Yet, those opposed to the ordinance insisted that it would be eliminating from current legislation exactly what it intends to add – the public’s ability to challenge size and scope of new development. Mark Salomon, a Green Party activist speaking on his own behalf, detailed that discretionary review of a project allows the planning commission to scrutinize and take action on it, and hear public input. However the new ordinance would limit such review to 5 percent of a project’s volume.

The pre-existing Better Neighborhoods model was established in response to the eastern neighborhood’s rezoning process, said Salomon. Through it were created three neighborhood plans – one each in the Market/Octavia, Central Waterfront, and Balboa Park areas.

“They were supposed to be done in six to nine months,” said Jim Meko, a South of Market neighborhood activist. “It’s approaching four years and the projects are just now wrapping up.”

“The process for [Better Neighborhoods 2002] was shaky on its own,” insisted Salomon. “At Octavia Boulevard.There was a tightly closed loop between planners, consultants and handpicked stakeholders who secretly determined the nature of the plan,” he detailed in a letter.

The plan was never evaluated to any extent Salomon learned about and he remains unsure of its goals, how it succeeded and/or failed, and what differences there were in the proposed plan versus the final product, he said. Such lack of communication and opportunity for public input is what many activists fear of Better Neighborhoods Plus legislation, which would apply to any plan area identified by the Planning Department 40 acres or more, and would immediately affect current planning in the Central Waterfront, Mission, Showplace Square and East SOMA areas.

Even Meko, who believes that the proposed ordinance is a “pretty good piece of legislation,” expressed concerns that its planning did not adequately involve members of the public, and instead involved a group of community insiders and the Planning Department.

“The people who put this together don’t have to wait for their three minutes of public comment,” he said, referring to the time limit that often is imposed on members of the public who wish to speak to an issue at government meetings. “It’s tough to agree with the implementation of something you had no say in.”

On the other hand, Welch assured the public that this new approach would make refinements to the existing model by ensuring broad public stakeholder representation in the process and that the scope of analyses covered in the plan would address a wide range of relevant neighborhood issues.

Welch said that Better Neighborhoods Plus comes, in large part, out of the staunch opposition that Proposition J received in 2004. Otherwise known as the workforce housing initiative, Proposition J (which lost by 84 percent), would have granted market-rate residential developers density bonuses in certain neighborhoods without ensuring public benefits or community participation, Welch said.

Fernando Marti, of Asian Neighborhoods Design and a speaker at the meeting, said he got involved with Better Neighborhoods Plus because he supported it as an alternative to Proposition J. He said that for the past year and a half, he and the other members of AND have been working with McGoldrick to speak with the public, assess their needs, and get communities involved.

“The intent here is to set up a framework; an infrastructure that establishes how planning should be done,” said Marti.

Marti identified the “plus” in the proposed ordinance as being the requirement for a comprehensive public improvements plan and financing strategy. He further established that key elements include requirements of a funded community outreach program and public scoping, as well as an analysis of the impacts of potential new development under the plan.

Meanwhile, Meko said that such a framework should have been established long ago.

“This is the type of thing any normal Planning Department would have done on its own.”

The Planning Commission will be holding meetings on this proposed legislation September 1, 8, and 15 in room 400 of City Hall. For more information on Better Neighborhoods Plus, please visit the City’s government site at www.sfgov.org and the Coalition for San Francisco Neighborhoods at www.csfn.net.

Speakers listen and respond to public comment on Better Neighborhoods Plus. Photo by Anton Stuebner