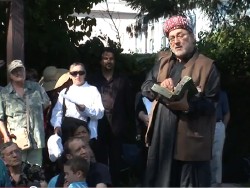 This past Saturday, on the ninth anniversary of 9/11, about 300 people gathered in Berkeley’s Ohlone Park to read the Koran and be present against the tide of anti-Islam sentiment ravaging the United States. Organized by the Berkeley-based Jewish organization Or Hadash USA/Return to Daylight, the event was attended by Jews, Muslims, Christians, Buddhists, Atheists and others.

The Saturday afternoon gathering was well organized and nicely moderated by Robin Braverman and Joel Siegel of Or Hadash. The program had two parts. In one, local Muslims chanted several lines of the Qur’an followed by a crowd member reading the English translation. Then, four or five participants volunteered to speak briefly about why they had chosen to attend the event. This pattern repeated many times over the course of two hour event.

A core theme of the afternoon was the parallel between the anti-Islam attitude that President Obama has condemmed and the anti-Semitism that preceded the worst of the Holocaust. The famous statement of German Pastor Martin Niemoller was paraphrased by several speakers, including a Holocaust survivor:

They came first for the Communists,
and I didn’t speak up because I wasn’t a Communist.

Then they came for the Jews,
and I didn’t speak up because I wasn’t a Jew.

Then they came for me
and by that time no one was left to speak up.

The gathering in a sunny park was the Berkeley inter-faith community “speaking up” in a meaningful way.

For example, a moving statement was made by a student training to be a reverend in a Protestant church. With tears in her eyes and a lump in her throat, the woman apologized for the hatred spewed in the name of Jesus Christ.

Several Imams and other Muslim leaders came forward to thank the crowd for its presence and intention. One leader invited the Muslims to go home and aquire a copy of the Torah and the Bible, the holy books of Jews and Christians, and to study them. The audience laughed when he next suggested that the Jews and Christians in the audience go home and read “a good translation” of the Koran.

Bay Area rabbis from many different congregations spoke, reminding the audience of the deep need to understand each other, each other’s holy books, each other’s traditions. Some spoke candidly of their own personal need to overcome bias and misunderstanding. The need for all of us to have hearts open enough to embrace differences and find commonalities was eloquently brought home.

The reading ended with the saying of Kaddish, the Jewish prayer recited for the dead, and a singing, in both Arabic and Hebrew, of the classic Jewish peace song, “Od Yavo Shalom Aleynu” (“Peace Will Yet Come Upon Us.”)

By now tens of millions across the globe have heard about the possibility of the Qur’an burning by a 30 person congregation in Florida. The 300 or so participants at Berkeley’s Qu’ran reading represented synagogues, mosques, churches and other institutions with thousands of members. Similar events across the country were attended by individuals representing yet other congregations and communities, both large and small.

Let’s hope these voices of peace ultimately receive the attention of the hateful 30.

Excerpts from Saturday’s gathering in Berkeley can be seen in a YouTube video of the Berkeley event posted by Kevin Pardo.

Lainey Feingold is on the Board of Berkeley’s Chochmat HaLev, a Jewish Renewal community that participated in Saturday’s event.