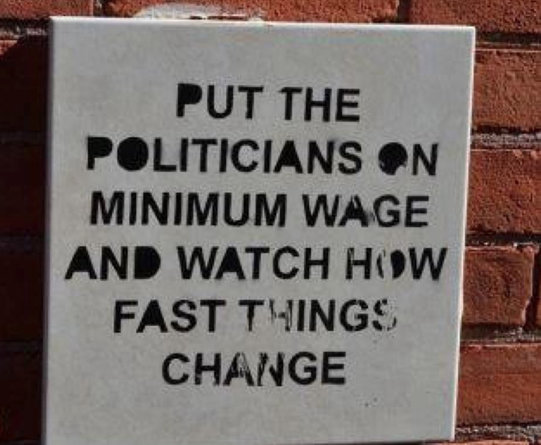 If further proof were needed that Berkeley has drifted from its reputation as a “People’s Republic,” the City Council’s passage last weak of a weak minimum wage law makes this clear.

In the year 2000, the Berkeley City Council voted for a living wage law that benefits workersemployed by businesses contracting with the city or on Berkeley owned property. The Council on Tuesday (May 6) approved a much more modest, and unquestionably, a rather miserable minimum wage ordinance that extends to almost all workers in Berkeley. Here is all there is to it:

Although the pressure from the business community was enormous, it was surprising to many and devastating to the Labor Commission that its proposal was completely ignored despite spending a year of hard work drafting the measure. It was especially distressing because the Commission had worked out a detailed agreement with Council member Capitelli, who was charged with the responsibility of reaching a compromise. Despite saying that he is giving his word that the proposal would be voted on with his support on at the May 6 Council meeting, he announced at Tuesday’s meeting “I renege”. Those words continue to ring in our ears.

The proposed ordinance submitted by the City Council’s own Labor Commission provided additional income to cover health care if it was not provided by employers. This provision was ignored by the City Council. Also eliminated was a substantially higher hourly wage for employees in large businesses. Non-profits are exempted for one year, which include Kaiser and Sutter, whose executives make millions of dollars.

The Labor Commission’s proposal also included annual increases that would have reached by year 2020 $15.25 an hour, and it would include a COLA each year afterward. But the measure that the City Council enacted expires after the January 1, 2016 increase to $10.75. Also, non-profits and government agencies will not be required to pay the minimum wage to young employees who were hired for job training purposes. Sounds innocent enough. But experience proves how such exemptions are often abused by non-profits offering training in name only. In short, many pro-labor provisions of the Labor Commission were omitted and some pro-business features were added.

Is there a brighter side to what happened? I hope so. But unless we can bring considerable pressure to bear, the prospects look gloomy. A ten member committee will be formed whose purpose is to fashion other minimum wage provisions. The committee will include four City Council members, three from the business community, and three representing labor interests. Since labor members are in the minority, It will be difficult to persuade the Committee to improve and expand pro-labor provisions.

There is no doubt that the majority of the public in Berkeley support a good minimum wage ordinance. And we demonstrated to the City Council the considerable public support by involving large numbers of people in one way or another. But on progressive economic issues, most of the Council members are unsympathetic. This may be surprising to many who think the Council is quite liberal. This is true, but mainly on domestic social issues and foreign policy matters, which it has often addressed.

So what do we do? Clearly, we have to take the referendum route. As on many issues, the public on economic issues is more progressives than those they elect. Take, for example, how eleven states have enacted a COLA in their minimum wage laws. Ten of these eleven States achieved the COLA by referendum. Only in Vermont was it enacted by the legislature.

Wouldn’t it be nice to have the kind of responsive elected official to save us the trouble of organizing mass demonstrations and intensive lobbying campaigns, and then after losing a campaign we are then compelled to get around them by taking the law into our own hands!