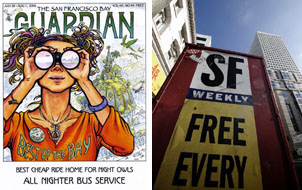 Attorneys for the SF Bay Guardian and New Times Media (SF Weekly) delivered opening statements yesterday in a case that could have a large bearing on the future of independent media – not only in the Bay Area, but across the country.

In his opening statement, Guardian attorney Ralph Alldredge said that the Weekly has sold ads at below cost for 11 years, since New Times Media (now Village Voice Media) purchased the paper in 1995. The Weekly has recorded losses of more than $25 million in that time period, with the losses escalating in the last few years. He said that the Guardian has lost “millions” to the Weekly in the last six years alone.

Defense counsel H. Sinclair Kerr Jr. argued that while the Weekly did indeed sell ads below cost, they didn’t do it to harm the Guardian. The Weekly argues that the Guardian’s losses are due to the economic downturn in the Bay Area following the dot com bust and because of their failure to adapt to changing market conditions for the print-media industry (the internet) that has recently seen dailies such as the Chronicle losing millions of dollars and cutting staff.

Alldredge described the corporate culture at New Times with regard to the Guardian as “war-like” and everyone in the room, including the jury, seemed to perk up when Alldredge showed internal memos in the form of e-mails between Weekly publisher Josh Fromson and New Times CEO Jim Larkin. In one e-mail Fromson wrote that even on his worst day he could beat Guardian publisher Bruce Brugmann on his best.

Kerr dismissed the e-mails as similar to how most companies discuss their competitors and he said that he would later produce messages between Guardian employees that speak in similar “disparaging” terms of the Weekly.

Kerr argues that the alt-weeklies aren’t simply competing with each other for prospective advertisers, but with every other media outlet in the Bay Area including dailies, radio, television and even taxi cabs. “The ad rates that the Weekly charged were all they could get for ads at the time,” he said. “It was a buyers market at the time.”

In 2003, New Times and Village Voice Media were forced into a settlement with the US Department of Justice over antitrust allegations that they colluded to stop competing with each other in both the Los Angeles and Cleveland markets. New Times had shut down their New Times LA, while Village Voice had stopped publishing the Cleveland Free Times. Just two years later, the companies merged creating a chain of 17 alt-weeklies.

At the heart of the case for those who care about the fate of independent media is that the Guardian has been forced to trim staff in order to cut costs. This has resulted in a decline in the resources the paper has to operate as a news organization, making it a less effective entity than it was previously.

Kerr said that the Weekly has chosen not to cut editorial staff in an attempt to try to ride out their current losses. The Weekly has the financial backing to do so – the Guardian does not.