BASTILLE DAY: NO POLITICS AS USUAL 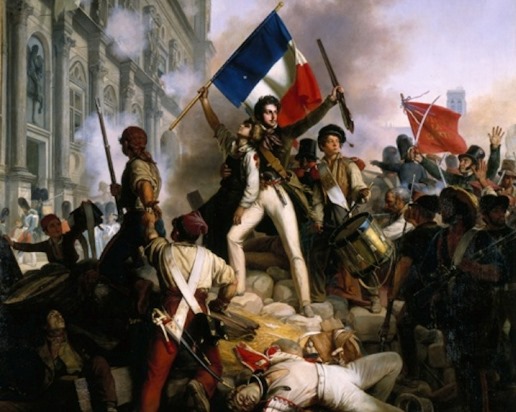 Yesterday, July 14, was Bastille Day. That was the day in 1789 when the people of France stormed the Bastille, the fortress-prison that had held many political prisoners and at the time was an armory well-stocked with guns and ammunition. The storming of the Bastille was one of the seminal events of the great French Revolution, which emblazoned the goals of Liberty, Equality and Fraternity into the consciousness of humankind.

The French Revolution, in significant part inspired by the revolution in the British colonies which became the United States of America, was itself one of the seminal political events of modern history, signaling the death knell of feudalism and the rise of capitalism.

That was over two hundred years ago. One of the most radical of the leaders of the French Revolution, Jean Paul Marat, while exhorting the people of France to overthrow the French aristocracy, and to seize power themselves, looked into the future and asked this question:

Those are words I contemplated this Bastille Day.

I just finished reading an excellent, brief biography of Marat by Clifford Conner, published by Pluto Press. Conner ends by asking what Marat would think if he returned today:

Marat “could read in the history books that the Great French Revolution – his Revolution – is recognized as the watershed event in the making of the modern world.”

“It rid France of a parasitic class whose right to rule was based upon aristocratic birthright and traditional privilege.”

“It established legal and political equality, which then spread throughout much of Europe and the world.”

“Legal and political equality? What about economic and social equality?”

“No, the situation in that regard is even worse than you remember it. Today, despite two centuries of mind-boggling technological progress, a handful of billionaires control most of the Earth’s resources while billions of people remain mired in hunger, disease, oppression, and grinding poverty.

“Marat would surely be shocked and dismayed to learn that, after more than 200 years, his struggle for social revolution had lost none of its relevance and urgency.”

We should all be shocked and dismayed.

Bastille Day should serve to remind us all that politics as usual is not an option.

Marc Norton has been a rank-and-file member of UNITE HERE Local 2, the San Francisco hotel, restaurant and culinary workers union, since 1976.  He is also a member of the Industrial Workers of the World (IWW).  His website is www.MarcNorton.us.