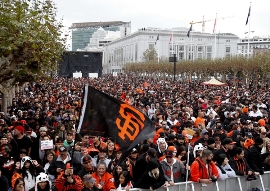 After predicting before last season that the Giants would face the Tigers in the World Series, I again see good things for the Giants. Unlike the 2011 Giants, this year’s team returns all of its key players. Buster Posey is the only returning starter that had a career year in 2012, and unlike Huff, Uribe, Torres, Sanchez, Renteria and Wilson —2010 stars that declined or departed in 2011– he is a good bet to equal his post-World Series year success. The 2013 Giants appear stronger than in 2012, and just as hungry to win. Does that mean we’ll have another victory parade down Market Street for Giants fans? Can the A’s repeat their surprising 2012 success? Here are my baseball predictions for 2013.

The 2013 baseball season begins next week. After getting little respect following their 2010 World Series victory, the San Francisco Giants are now viewed as the best organization in baseball.

Having grown up amidst manager Alvin Dark’s racism, Herman Franks’ mediocrity, Charlie Fox’s incompetency, and owner Horace Stoneham’s lethargy, I never thought I’d be praising the Giants organization. After all, this is a team that hired Spec Richardson as its general manager after he traded away a young Rusty Staub to the Expos and future Hall of Famer Joe Morgan to the Reds during his prior tenure with the Houston Astros.

Never again will our team trade an Orlando Cepeda for a Ray Sadecki. And if that 1966 trade does not resonate with you, or if you have not ever heard of it, be very, very grateful.

Let’s start with this essential fact: few Giants starters had unusually great years in 2012 that cannot be repeated this year.

For the position players, Belt, Crawford, Sandoval, Pence and Blanco will hit as well or better in 2013 than they did in 2012 (Belt’s improvement could be dramatic). Pablo Sandoval is currently bothered by injuries, but he missed two months of the 2012 season and is on a hitting tear. Belt and Crawford underperformed in the first half of last season, and Hunter Pence could hardly hit worse.

Three starters had banner years in 2012: Posey, Scutaro, and Pagan. But Posey is among the top two players in the game, Scutaro only joined the Giants at season’s end, and Pagan remains in his prime and should have a strong season.

No Giants starting pitcher had a career year in 2012. To the contrary, Tim Lincecum was terrible as a starter and Matt Cain never got his mojo back after his perfect game, Madison Bumgarner had an awful September, Ryan Vogelsong was inconsistent at season’s end, and Barry Zito was effective but inconsistent.

The Giants starters will not pitch worse in 2013. Bumgarner is primed for a breakout season (which should have happened in 2012), and Cain has recovered from his post-perfect game fatigue. Vogelsong and Zito can match their 2012 performances.

The Giants bullpen makes the team special. Sergio Romo could break down during the season, but even if this worst-case scenario occurs. Bochy’s closer by committee approach will still protect late inning leads.

Blocking the Giants returning to the World Series are the Reds and Nationals.

Reds fans believe that if star pitcher Johnny Cueto did not suffer a freak, series-ending injury in the opening game against the Giants, then Cincinnati rather than San Francisco wins the 2012 title. I’m not sold on the Reds pitching, and still like the Giants chances against them in a short series.

The Nationals offer a tougher challenge.

Having acquired a real closer (Rafael Soriano, who had a strong year for the Yankees in 2012), they may be baseball’s best team. Washington DC has not had a World Series winner since 1924 (!), and the city is due.

But here’s my problem with picking the Nationals—injuries. This is not an issue for the Giants, because during the Righetti-Bochy era the Giants starting pitching staff has consistently been healthy when the post-season begins.

The Nationals’ Steven Strasberg has never pitched more than the 160 innings he was limited to last season. And can we rely on the health of Gio Gonzalez, who won 21 games last year but had a weak post-season record and has been linked to a Miami-based clinic disbursing performance enhancing drugs?

A healthy Nationals team in October could beat the Giants. But I don’t like risky predictions, and will go with the Giants to return to the World Series.

Not on Angels Bandwagon

Nearly everybody likes the Angels in the World Series. The combination of Mike Trout, Albert Pujols, and newly acquired Josh Hamilton is a modern-day Murderers Row. If pitching did not decide championships I would also be all in for the Angels—a franchise I like despite the 2002 World Series.

Do Angels’ backers know that Joe Blanton is in its starting rotation? That C.J. Wilson, its number two starter, would at best be the Giants fifth?

The fan website “Halo Heaven” ran a story this week, “Angels push the Bullpen Panic Button” in which it described the team’s relief corps as “terrible.” Recall the last team that won the World Series with a “terrible” bullpen? I can’t. You may have to go back to the 1955 Dodgers, when relief pitching was far less important.

I think the Angels will get past the A’s this year, but Oakland team still seems better than the Rangers and should make the playoffs as a second wild card (facing either the Yankees or Orioles) in a very weak American league.

I like the Tigers over the Angels to reach the World Series because of Justin Verlander and superior pitching overall. They have their own trio of great hitters in reigning MVP Miguel Cabrera, Prince Fielder and Victor Martinez.

But curiously for a savvy organization, the Tigers enter the season without an established closer. They hoped it would be Bruce Rondon, but he was sent to the minors this week.

This means the Tigers have the same World Series flaw as in 2012, and, unless they get a closer by playoff time, will lose again.

I see another Giants-Tigers World Series next October.

Randy Shaw is Editor of BeyondChron.