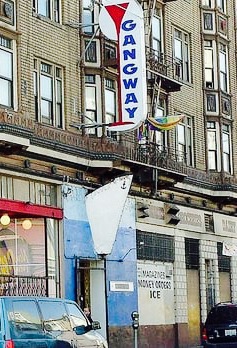 The proposed sale of the Gangway, San Francisco’s oldest gay bar, revives questions as to what the loss of storied businesses means for the city. Located at 841 Larkin Street under the Hartland Hotel in the city’s Tenderloin neighborhood, the Gangway has been open since 1910 and a gay bar since 1961.

According to the August 7 SF Chronicle, the Gangway “is in the process of being sold to Sam Young,” who runs the Kozy Kar bar at Polk and Sacramento. The Kozy Kar bar got into trouble in 2015 by posting a joke about date rape, and critics of the sale do not feel Young’s operation is a good fit for the neighborhood.

From the end of WW2 through the 1960’s, the Tenderloin’s gay bars were the center of resistance to the city crackdown on gays. This history explains why many do not want the Gangway to disappear and the site become just another bar.

I also wish the Gangway would remain a gay bar. But here’s the problem: the bar has not been doing well for some time. In fact, the Gangway has been up for sale for nearly three years.

This is not the first time in recent years where there have been obituaries written for the Gangway. In January 2016, SF Fist reported that the Gangway would be “biting the dust soon.”

The article described the Gangway as a “well-loved but rarely busy old-man bar.” The 2016 sale was not final, but the article concluded that “it seems all but guaranteed to become a not-gay bar.”

The Gangway has been owned by people lacking the resources and enthusiasm to make it a viable gay bar for today’s San Francisco. The bar’s description as a “rarely busy old-man bar” also applied to another Tenderloin dive bar landmark that closed in 2016, the Brown Jug at Hyde and Eddy. The Brown Jug was closed by the ABC for illegal activities, but it also failed to keep up with the times.

Bars that cannot attract the under-forty crowd are probably not going to  survive. The Gangway’s historic gay legacy has not translated into enough new patronage.

It had a chance to claim the young crowd that used to go to the now closed Amsterdam bar around the corner, but failed to do so. Nobody has already bought the Gangway to keep it a gay bar, yet it has been available for sale for years.

There’s a lot of competition among bars these days, and the current Gangway owner has not been up to the task. His ongoing effort to sell shows he recognizes this.

If anyone wants to buy the Gangway and keep it a gay bar, step up now. Otherwise, business realities will bring  a new bar owner with a different vision.

Regardless of the fate of the bar, the historic Gangway neon sign will be preserved and its lighting restored.

Would the Gangway’s transformation into a conventional bar represent the further vanishing of the authentic San Francisco?

I raise that question following a snarky August 13 NY Times story on Jeremiah Moss, author of Vanishing New York: How a Great City Lost its Soul. Moss’s blog, now a book, laments the loss of longtime uniquely New York City retail establishments and their replacement by homogeneous businesses that can be found anywhere.

I follow Moss on Twitter (#SaveNYC) and am a big fan of his work. Yet the Times story decided to “balance” Moss’ bemoaning of lost businesses with a claim by a fellow author that “People have always been complaining that New York is not what it used to be.”

I get that. Older people want to keep stores they remember from their youth.  Yet this can lead to lamenting lost businesses that failed to adapt to customers’ needs or that no longer fit the times.

San Francisco, like New York City, has always had business turnover.  The popularity of restaurants and bars is often cyclical.

When I got to San Francisco we used to love getting a drink outside at Enrico’s on Broadway. Our favorite Italian restaurant was Little Italy in Noe Valley, and we regularly ate at Roosevelt’s Tamale Parlor on 24th Street in the Mission. Our favorite San Francisco restaurant—by far— was Stars, which put chef Jeremiah Tower on the national map.

All of those and many other favored establishments of the 1980’s are gone. Most were not the victims of a steep rent increase or surrounding gentrification, but rather changing times and decisions by owners to do something else.

A city does not become less “authentic” because a new establishment replaces what was there before.  A city’s vitality depends on businesses that serve what people today—not what was popular in 1987 or 1967.

But authenticity is lost when, as Moss regularly documents and as I saw firsthand when an enormously popular lunch spot across from Madison Square Park became a Chase Bank, corporate chains replace independent businesses.

San Francisco has laws restricting such chains. It also has a Legacy Business law helps the places that matter most. New York City lacks such protections. That’s among the reasons Moss’s alerting the public to try to save at risk businesses has proved so important.

With retail on life-support in many urban neighborhoods, preserving viable independent businesses has never been more important. Nor has supporting the new businesses as they try to create a new set of memories for the younger generation.