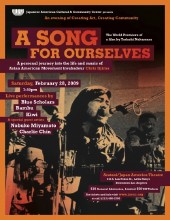 The recent 27th San Francisco International Asian American Film Festival (hereafter SFIAAFF) preview offered a sobering wake-up call to the white progressive community. One cannot claim one has successfully reached out to a community of color if no effort is made to learn of a particular community of color’s heroes. Fortunately, when the SFIAAFF arrives in March, progressives of all colors can correct one small bit of cultural ignorance with the two documentaries shown at the preview.

The preview screening began with a near-completed print of the Chris Iijima portrait “A Song For Ourselves.” Director Tad Nakamura had previously dealt with the hidden political history of the Japanese American community. Last year’s excellent “Pilgrimage” recounted the founding of the annual pilgrimage to the Japanese American internment camps.

Nakamura’s new film dealt with a person, not a movement. That person was revered Japanese-American veteran activist Chris Iijima. The man first made his mark during the late 1960s as the first political Asian-American folk singer. His work with Nobuko Miyamoto and Charlie Chin eventually led to the first Asian-American political folk music album “Like Grains Of Sand.” Nakamura’s film doesn’t end when Iijima ends his musical career. It follows the late activist as he translates his political activism into teaching and even his personal relationships.

Ijima, in Nakamura’s eyes, turned out to be one of those rare people who managed to balance his political activism with his developing a loving family. The decision to move the family to Hawaii came in the context of the pleasure of not having to deal with others’ assumptions that his family was visitors or recent arrivals to the U.S. While the interviews with Iijima’s family capture Iijima the man, the film shortchanged Iijima the post-folksinger activist by not providing more examples of his specific public political activities.

Seeing Iijima’s active political work during the 1960s provides a sharp reminder that Asian-American perspectives on the events of the 1960s have not been part of the official canon. For instance, Iijima took the American involvement in the Vietnam War personally. He saw the conflict as Americans killing people who looked just like him. That sense of insult and disrespect comes through clearly in the vintage footage of American soldiers placing aces of spades on the faces of slain Vietnamese soldiers.

Iijima also supported the Black Panther Movement. But he was also very much aware that he wasn’t black. A new movement needed to exist to give voice to his individual concerns.

Nakamura has a bit of fun with this section of the film. The old reports of American air attacks are brought to life via animation of old editorial cartoons.

“A Song For Ourselves” reminds viewers that “Asian-American progressivism” is not a rarity. It is a strain of activism that’s not acknowledged often enough.

Receiving a bit more acknowledgment was the late Patsy T. Mink. She was the subject of the other film shown at the preview, “Patsy Mink: Ahead of the Majority.” Director Kimberlee Bassford’s documentary traced the life of the late Congresswoman from childhood and early career frustrations through her nearly quarter century of service in the U.S. House of Representatives.

Mink broke quite a few societal barriers over the course of her Congressional career. She was the first Asian-American woman elected to the House of Representatives. More importantly, the Hawaiian Representative repeatedly advocated for laws that would use government to correct social injustice. Title IX legislation, which mandated sexual equity in academic and sports education funding, was Mink’s greatest legacy.

Bassford shows rather than spells out how Mink’s personal hardships shaped her Congressional career of fighting against social inequity. Despite impressive success in graduating from both medical and law schools, Mink’s best private sector job was being hired as a secretary with the instruction to look pretty and not do much of anything. Her father destroyed personal mementos from Japan rather than risk internment for his family during World War II. Perhaps that incident made her skeptical of unfettered trust in the federal government.

Politics proved the venue where Mink could finally realize her true potential. Admittedly, Mink was in the right place and time to be part of an effort to strengthen Hawaii’s Democratic Party movement. But Bassford’s documentary shows that Mink’s tenacity helped her to survive and succeed in Congress. That quality certainly proved useful when she took great political heat for opposing the Vietnam War and 1990s “welfare reform.”

Did people underestimate the abilities of the short Japanese-American representative? Wince-inducing clips from “What’s My Line” and “The Mike Douglas Show” show her being treated as a novelty. Mink herself is not recorded as taking offense. But one can’t help wondering how much she used others’ misperceptions of her to personal advantage.

Bassford’s documentary definitely doesn’t count as a hagiography. Her notoriety for pushing for things to be done ASAP certainly made her something of a demanding boss. Several former aides talk about how Mink eventually made them terrified of black construction paper. Yet the film does skimp on Mink’s dealing with the reality of beng a liberal legislator in the midst of the so-called Republican Revolution. Did the organized hostility and power of the Republican legislators give Mink a moment’s pause about her effectiveness? Or did she naively believe she could still pass liberal legislation? The documentary is silent on this point.

In the end, Bassford’s treatment of Mink’s life lives up to its title. The rest of society is still far behind the marks set by the late Representative. Decades after Title IX’s passage, male coaches still argue that its provisions somehow cripple male athletic opportunities. Mink’s opposition to the passage of the original PATRIOT Act has still not been followed sufficiently by the likes of Nancy Pelosi. Barack Obama was treated as a freak or a foreigner during his presidential run. Someday, America will live up to Mink’s vision of the country.