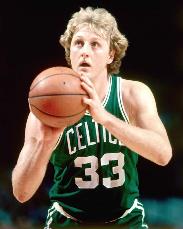 Since Indiana Pacers President Larry Bird made a major midseason trade, the team has imploded. Yet Bird, the best white NBA player over the last thirty years, gets no blame in the media for wrecking the Pacers chemistry.

As the Indiana Pacers face a 3-2 deficit to the Atlanta Hawks, the team faces the biggest collapse of a top seed in NBA history. Unlike prior upsets of number one seeds, in midseason the Pacers were a favorite to win the NBA title. Many expected them to right their ship once the playoffs began.

What happened to the Pacers? I’ve read a lot of theories from basketball insiders, and they have one common thread: none blame Larry Bird for messing with the team’s chemistry by trading the popular Danny Granger.

After the Detroit Pistons 1987 playoff defeat to Bird’s Boston Celtics, a young Dennis Rodman told reporters that “if Bird were black he ”would be just another good guy” rather than being seen as among the top players. The media then rushed to ask Isiah Thomas if he agreed with Rodman, and, eager to stand by his teammate, Thomas said he agreed. The resulting firestorm made Thomas look worse by the day, and even a joint Bird-Thomas press conference could not put the issue to rest (you can watch this controversy as part of ESPN’s 30 for 30 “Bad Boys” episode).

Thomas looked bad because Bird was unquestionably among the NBA’s top three players, and his race had nothing to do with this status. Yet media favoritism toward Bird has been evident since he took over a successful Pacers team as coach in 1997 and proved he was not up to the task. His first tenure as team president (2003-12) coincided with a long dry spell for the Pacers, and he returned to the position in 2014 after the key ingredients were in place for a title run.

Despite inheriting talented teams and not taking them to the next level, Bird has won both Coach and Executive of the Year awards. Had his mid-season trade of Granger for Evan Turner paid off, Bird would be extolled as the genius who brought the Pacers their first NBA title.

But the trade has proved a catastrophe. Granger was a mentor to young superstar Paul George, and George’s game has plunged since the trade. Granger was a popular veteran who proved the glue holding a young team of combustible personalities together; Turner added to this combustion, and has brought nothing to the court.

The Pacers have gone from title favorites to underdogs trying to overcome a 3-2 deficit to the Atlanta Hawks. The Hawks were 38-44 in the regular season, but are playing with a spirit entirely missing from the now listless Pacers.
Larry Bird inherited a team on track for a title and derailed it. The Granger trade was not seen as having such potential downside at the time—I recall Charles Barkley claiming it would bring the Pacers a title—but it did.

Those who would have credited Bird for bringing the Pacers a title if the trade worked need to hold him equally accountable for its failure. And while Pacers Coach Frank Vogel is likely to lose his job if the Hawks eliminate the Pacers, he didn’t make the Granger trade—Bird did.