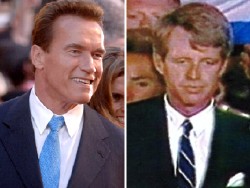 While it’s no longer news that California Governor Arnold Schwarzenegger is a fraud (which helps explains poll numbers that are lower than George W. Bush and the pre-recall Gray Davis), his veto this week of an overtime bill for California farmworkers is particularly disgraceful. Schwarzenegger’s wife, Maria Shriver, is the daughter of Peace Corps founder Sargent Shriver. Her mother was Eunice Kennedy Shriver – sister of John, Robert and Ted Kennedy. Schwarzenegger likes to say how influenced he was by his father-in-law, but his record in office exposes that lie. No politician fought harder for farmworker rights than Robert Kennedy, and the Governor’s veto insults the Kennedy legacy.

When I wrote about the farmworker overtime bill sponsored by State Senator Dean Florez on June 8, it did not have the support of the United Farm Workers. But the UFW ended up pushing hard for the measure, which simply gives California farmworkers the same overtime rights as other workers.

Florez told me at the time that he thought the Governor might sign the bill, and it seemed a way for him to burnish his liberal image as he heads out of office as a consensus political failure. I thought signing the bill would garner him a positive New York Times editorial, as the paper has aggressively advocated ending the legacy of racial discrimination that denied a class of overwhelmingly non-white workers – farm workers – equal rights.

But following the lead of every previous California Republican Governor, Schwarzenegger sided with wealthy growers against low-income farmworkers. After vetoing this bill, even the Governor should be ashamed to talk about the legacy of the Shriver and Kennedy families – both of whom, unlike Arnold, did everything in their power to help California farmworkers, at a time when that was very politically controversial.

I describe in my book, Beyond the Fields, how Senator Robert Kennedy built Catholic support for farmworkers as far back as 1966. Kennedy told a press conference that he considered “a bishop’s first responsibility to be with the poor and oppressed.” He said he would be “shocked” to hear that a bishop would forbid priests from helping farmworkers, and that bishops “should encourage their priests to work with the farm laborer. They themselves should leave their homes and live among these workers.”

That’s one of the many reasons why Robert Kennedy will never be forgotten, while Arnold Schwarzenegger is a footnote to history well before his term ends.

Randy is the author of Beyond the Fields: Cesar Chavez, the UFW and the Struggle for Justice in the 21st Century. Follow Randy on Twitter: @RandyTHClinic.