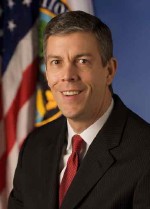 Many eyes will be on Secretary of Education Arne Duncan when he speaks today at the San Francisco School Alliance Luncheon at the historic Palace Hotel, as well as at the California Mayor’s Education Roundtable, hosted by Mayor Gavin Newsom. Newsom’s Education Advisor, Hydra Mendoza, who doubles as a school board member, has her fingerprints all over this event, aiding the Gav to get a generous helping of publicity in his twittering campaign for Governor of the collapsing State of California.

Much could be said about President Barack Obama’s pick to head the nation’s education establishment. For example, an article in the New York Times recently opined that the “$100 billion in emergency aid for public schools and colleges in the economic stimulus bill could transform Arne Duncan into an exceptional figure in the history of federal education policy: a secretary of education loaded with money and the power to spend large chunks of it as he sees fit.” No wonder the Palace luncheon is sold out.

Duncan and Mendoza will not just be sharing lunch at the Palace today. They also share a deep and abiding commitment to the militarization of education and of our youth. As CEO of Chicago’s schools, one of the largest school districts in the nation, Duncan oversaw a district with the largest concentration of military academies in the nation. These military academies are public schools run by the Pentagon. “Over 10,000 Chicago students now wear a military uniform to class,” according to Chicago reporter Elizabeth Brackett.

Some of these students are as young as 11 years old. An overwhelming majority of them, not surprisingly, are youth of color. “We don’t have any Vanderbilts or Rockefellers in here,” concedes retired Brig. General Frank Bacon Jr., the founding superintendent of the Chicago Military Academy.

“We are very proud of our program in Chicago Public Schools,” says Lieutenant Colonel Rick W. Mills, the Military Area Officer in charge of six military high schools, four military academies located in otherwise non-military schools, 34 JROTC programs, and 18 Middle School Cadet Corps programs. “We have the largest JROTC program in the country in number of cadets and total programs.”

Mendoza is a booster of a much smaller dose of militarism here in San Francisco. She was part of the 4-3 vote majority that succeeded, just last week, in restoring San Francisco’s seven JROTC programs, after a three-year-long battle begun in 2006 when a previous school board voted to phase out the military program.

Mendoza’s boss, Mayor Gavin Newsom, stated on KGO AM 810 Newstalk Radio on May 13, 2009, the day after the school board vote on JROTC, that “I couldn’t be more pleased” at the vote to restore the program, and that “I am very proud that my senior advisor on education was the swing vote, Hydra Mendoza…”

This is an unusual spin on the JROTC vote. Most observers had pegged school board member Norman Yee as the swing vote, assuming all along that Mendoza would fall in behind Newsom’s lead on the issue. Hopefully, Yee is not too offended by Newsom’s attempt to steal his thunder.

Newsom went on to add, “Now we have to look to get these PE credits reestablished.” This is an issue that will likely be fought over at next Tuesday’s school board meeting. The military has historically used Physical Education (PE) credit as a recruiting tool for JROTC, enticing 14 and 15 year old freshmen and sophomores into the program as a way to avoid real PE classes. That is, until recent bipartisan efforts in the state legislature tightened up PE standards, curriculum and credentialing requirements.

Mendoza was appointed by Newsom as his Education Advisor in 2005, and is employed in this position entirely at the Gav’s discretion.

Some School Board observers have suggested that Mendoza’s status as an employee-at-will of the Mayor creates a conflict of interest for her in regards to the very controversial issue of JROTC, especially in light of Newsom’s boast on KGO, and that she should recuse herself from further votes on this matter, such as the upcoming PE credit issue.

Not being a lawyer, or particularly knowledgeable about the rules in this area, I will leave any determination of this matter to the legal eagles, and any further agitation on this point to braver pundits.

I do, however, wish Arne, Gavin and Hydra a nice day.