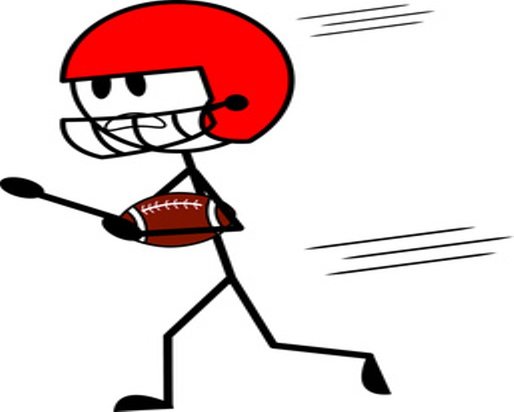 Now those rules are up for renewal as part of the Child Nutrition Reauthorization. What used to be a bipartisan effort to ensure low income kids got healthy school meals has now become a battle over what opponents call “a federal one-size-fits-all mandate.”

As a result, a new character has emerged in the cafeteria food fight – the Starving Football Player, who supposedly can’t get enough to eat under new rules to make it through a scrimmage without malnutrition setting in.

How legitimate are fears that healthy school lunches are failing to meet student athletes’ nutritional needs? Some say federal calorie limits should be abandoned, leaving it up to kids to decide how many calories they want to consume at school. But is that a solution in search of a problem?

It is interesting to see how completely public opinion can flip flop on what the “real” problem is with school lunches. Remember back a decade ago, when America was just waking up to a new crisis? As the Washington Post put it:

“By the dawn of the 21st century, the public health community coalesced around the idea that overweight and obesity were serious threats to the nation’s youth. The journal Pediatrics published a commentary in November 2002 titled “Childhood Obesity: A New Pandemic of the New Millennium.” …By the time first lady Michelle Obama launched her “Let’s Move” campaign in 2010, it was almost impossible for anyone paying attention to be unaware of the crisis.”

The school lunch program was one of the culprits blamed for the child obesity crisis. In 2011, TIME magazine asked “Is school lunch making your kids fat?” and concluded that it was. But help, TIME said, was on the way:

“The Obama administration’s new Healthy, Hunger-Free Kids Act of 2010, signed into law last December, sets aside $4.5 billion over 10 years to fund school lunches and child nutrition programs; it requires school lunch programs to double the amount of fresh fruits and vegetables in each meal, reduce calories and expand access to drinking water during meal time. With 31 million children receiving school lunches and 20% of all U.S. children suffering from obesity, the measure should help to improve the food environment, at least for one meal a day.”

In addition to requiring more fruit, vegetables and whole grains, the HHFKA also, for the first time, set an upper limit on the amount of calories a school lunch could contain. As NYU Professor Marion Nestle, author of Food Politics, explained:

“The new lunch standards hardly call for starvation rations. Kindergarteners through fifth-graders get up to 650 calories. The maximum is 700 for kids in grades six through eight, and 850 for high schoolers. All kids can have extra servings of vegetables. This ought to be plenty to get most of today’s kids – sedentary, underactive and prone to obesity as they are – through any school day.”

Fast forward just a bit, and suddenly the media found the problem was not that too many children were overweight or obese (although according to the CDC, in 2012, more than one third still were.) Instead, stories about the problem with school lunch featured a new poster child – not the chubby student with a lunch tray full of tater tots and cookies, but rather the Starving Football Player.

His first appearance may have been at a Wisconsin high school where, in September 2012, students boycotted school lunch. As Fox News reported, “One such student from Mukwonago High, Nick Blohm, said the healthier food is not so much the problem as it is portion size.  A 6-foot-3-inch, 210-pound linebacker, Blohm said he burns around 3,000 calories during three hours of football practice and weight training.”

Soon after, the Starving Football Player popped up in a video made by teachers at a Kansas high school, at a Louisiana State Senate committee hearing, and in posturing by a Texas state legislator.

On April 15, the Starving Football Player was invoked by Rep. John Kline (R-WI), Chair of the US House Education and Workforce Committee, at its first hearing on the upcoming reauthorization of child nutrition programs.

Explaining why he thinks some wealthier school districts are leaving the National School Lunch Program, Kline described visiting a high school in his home district and observing the lunch program. He said students told him they want school lunch to be “bigger and better.”

“There was one young man sitting there, a senior, getting ready to go off next year on a football scholarship,” said Kline. “His portion was exactly the same size as the kid who weighed probably 100 pounds less and was not going off to play football.”

Kline went on to say that students felt the school should withdraw from the National School Lunch Program so that portions exceeding federal limits could be served.

How many of the approximately 17 million US public or private high school students play football? More than you might think – according to the National Federation of State High School Associations (NFHS), close to 1,100,000 boys (and 1,715 girls) participated in 11-player football in 2013-14. This means close to 6% of high school students play football, but more than 94% don’t.

NFHS reports that in the same year, nearly 7.8 million high school students, or about 45%, played some kind of sport.

As Marion Nestle pointed out, the federal limit of 850 calories for a high school student’s lunch is more than adequate for most students. The whole student body does not need to eat as if they were all playing tackle on the football team.

The School Nutrition Association, whose members include both those who run school meal programs and those who supply the products they serve, has been calling for reducing the amount of whole grains, fruits and vegetables in students’ meals. They say this is necessary to save money and make meals more popular with kids.

Ironically, the best food for student athletes is exactly what SNA is lobbying to cut.

According to this article on nutrition tips for student athletes, ” ‘The most important thing is to make sure you have enough energy [in the form of] food, and the best kind of energy for athletes are complex carbohydrates such as fruits, vegetables and whole grains,’ said Mary-Jo Lomax, a health educator at De Anza College.”

Rep. Kline complained that a one size fits all portion for lunch entrees doesn’t work for football players who might need more calories, but the idea that student athletes need to have larger servings of pizza or hot dogs is nonsense. Eating an enormous lunch a few hours before sports practice is not advisable.

“All that digestion takes energy, and you want to avoid getting cramps,” said Lomax, who instead recommended “a light snack of low-fiber fruits and vegetables, yogurt or crackers an hour prior to competing.”

The USDA already provides funding for schools to serve exactly this kind of snack – fruit or veg, crackers, a drink – through the Afterschool Snack program, which is available to any National School Lunch Program school that has afterschool enrichment activities like clubs or tutoring. There’s no need to supersize school lunch entrees to get kids the calories they need to be active after school.

While a football player may burn over 1000 more calories a day than a less active teen, there is no reason to think he needs to get all of those extra calories at lunch. A larger breakfast plus a midmorning snack brought from home, as well as a bigger dinner, can all contribute needed calories.

For cafeterias that want to provide more food to their athletes, many schools have had success with a “sharing table,” where students can deposit parts of their lunch – fruit, milk – that they don’t care to eat; other students are welcome to help themselves to anything from the sharing table. This serves two purposes – it both cuts down on the amount of food going into the trash, and ensures that everyone can get enough to eat, even those athletes who feel they need more calories.

Not every school food service director is falling for the Starving Football Player meme. As Carrie Bonacci from Liverpool High School near Syracuse NY, has observed, entrees may be smaller under HHFKA rules, but portions of fruit and vegetables are now larger. If the students ate the full meal, she says, they’d be full.

The cafeteria fight may be less about whether student athletes are starving and more about Republicans bashing the school lunch overhaul championed by First Lady Michelle Obama. With a Presidential election looming next year, some GOP members seems happy to jump on any issue they can find to portray Democratic health reforms – including healthier school lunch rules – as costly and intrusive federal overreach.

While Rep. John Kline was listening to his Starving Football Player in that wealthy Wisconsin high school, another Republican, Kansas Senator Pat Roberts, was visiting a school cafeteria in his home state. That school happily embraced the new school lunch rules and made them work.

Roberts did not hide behind the cover of the Starving Football Player to justify his opposition to the HHFKA regulations. Instead, he provided insight into what Republicans’ real problem is with healthy school lunch rules. The LA Times reported:

“[Roberts] told student reporters there he was impressed by the meals being served. But don’t look to him to vote to renew the program. ‘I just have a problem with the federal government,’ Roberts said in a lunchroom video interview. ‘I don’t think our Founding Fathers sat around the table and said, ‘I have a great idea. Let’s mandate what people eat.'”

Perhaps the Founding Fathers never had that conversation because in colonial America, life expectancy was only 35-40 years. There was no obesity crisis threatening to produce children with even shorter life spans than their parents.

Imagine what the settlers at Jamestown (those who didn’t die of starvation) or the soldiers of the Continental Army weak from lack of food at Valley Forge, would think of today’s well-fed youth feigning collapse from hunger to get bigger servings of pizza and burgers.

And let’s not forget that our Founding Fathers were also okay with slavery, child labor, and denying rights and the vote to all but white male landowners. We’ve come a long was as a society since then.

It’s time for Republicans to join the rest of us in the 21st century, and stop using school lunch as a political football.