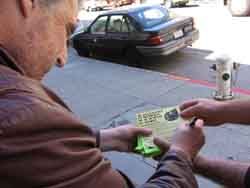 Transit advocates took the Muni fare fight to riders this morning, as twenty or so members of the Coalition for Transit Justice held a protest at the corner of 16th and Mission Streets this morning against planned Muni fare hikes and service cuts and to rally rider support for future actions at City Hall.


Casey Mills opened the round of bullhorn speakers by saying “This fare hike is unjust. It disproportionately affects low-income people and communities of color, service cuts do the same.” Bob Planthold of the Senior Action Network railed against Muni’s past intransigence, asking the crowd, “Would you keep your job if you did nothing? The mayor lets the MTA keep their jobs and they do nothing.” Richard Marquez of Mission Agenda said simply “No seat, no fare on Muni.”

Starting in September, the Municipal Transportation Agency plans to institute a twenty-five cent base fare increase and a 5% across-the-board service cut to help close its projected $57.3M budget deficit. The MTA also plans to raise the senior/disabled fare and the price of a monthly pass.

The CTJ wants the MTA to use increased parking fees and taxes on downtown business to balance the budget. Such a move would not only shore up Muni’s finances, they say, it would also make public transit more attractive and shift the financial burden from commuters to the companies that they work for. The MTA rolled back the severity of possible cuts over a series of contentious hearings this winter, but the CTJ and others maintain that the MTA did not diligently pursue other funding sources.

Those concessions are not enough for the CTJ who vowed to “bring a dump-truck full” of signed protest cards to City Hall. No one from City Hall was there this morning, but in the weeks before the MTA decision Supervisors Aaron Peskin, Ross Mirkarimi and Chris Daly all threatened action against an MTA budget that contained fare increases.

Though the protest failed to congeal the rush-hour crowd on the 22, 53, 14, and 49 lines, many commuters stopped to listen and sign City-Hall addressed protest cards while they waited for their bus. Several even took stacks of the cards to pass out on their ride.

The real strength of the coalition lies in on-the-bus canvassing. Coalition supporter Donnie Mac said that the riders had been supportive and that some drivers had even let him on for free, adding: “We’re building momentum. Not only are we getting more organizations, we’re getting more people.” The fare hike issue should reappear on City Hall radar as the budget approval season begins. Until then, the CTJ will keep riding the bus.