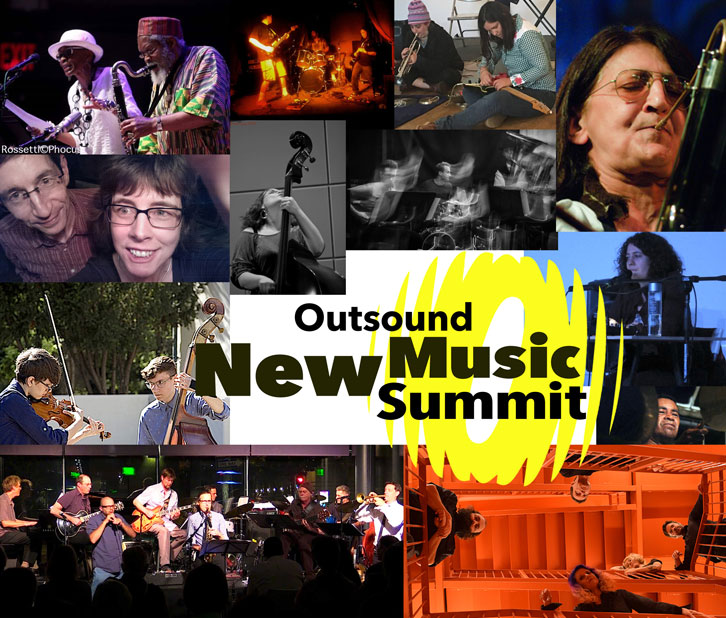 The 16th Annual Outsound New Music Summit, returns to San Francisco from July 23rd-29th at the Community Music Center, located at 544 Capp Street in the Mission. One of the most innovative showcases for musical artists from around the world includes a free hands-on expo, pre-concert artist talks, and five nights of music featuring a diverse roster of artists. “The Summit promotes intermedia, fostering cross-pollination between disciplines of music, sound art, visual and media arts. It’s designed to bring cutting-edge music and art to a growing audience seeking to go beyond the San Francisco live music status quo—and to provide rare paid performance opportunities to adventurous musicians and sound artists.”

Since 2002, the Outsound New Music Summit, presented by Outsound Presents, spends a week every July showcasing a broad range of local and national artists, world premieres and first-time collaborations, featuring everything from free improvisation to microtonal composition to experimental electronics to harsh noise, covering the broadest range of musical exploration and sonic creativity.

The Outsound New Music Summit has showcased over 500 innovative and pioneering musicians from the West Coast, as well as from other parts of the U.S., Europe, Asia and Australia—many of them performing in the Bay Area for the first time. Notable guests have included the legendary Richard Waters, inventor of the waterphone; beat poetry founder ruth weiss; Tom Nunn, Vinny Golia, Jill Burton, Jack Wright, the Illuminated Corridor Collective; and many others.”

Sunday, July 23, 5-8pm: Touch the Gear Expo
Outsound Presents brings another installment of their original public event Touch the Gear to the Summit. This hands-on, kid and family-friendly exposition is free and open to the public sure to excite and foster the spirit of discovery for all ages. During the evening attendees get to roam among the exhibition getting a hands-on experience of sound producing gear, computers, instruments and invention! — Everything from oscillators and electronics, to planks of wood with strings attached; All attendees get to ask questions, make sound and experience how the instruments work, in an environment that demystifies technology while inspiring creativity. Free Admission, all ages.

Wednesday, July 26, Q&A 7:30pm Music 8:15pm:
Saxophonist Phillip Greenlief and writer/poet Claudia La Rocco created Animals & Giraffes as a way to explore how improvisation on and off the page can create a larger conversation between sound and text. Since his emergence on the west coast in the late 1970s, saxophonist/composer Phillip Greenlief has achieved international critical acclaim for his recordings and performances with musicians and composers in the post-jazz continuum as well as new music innovators and virtuosic improvisers. Opening will be Amy Reed and Collette McCaslin, two women with very integrated approaches to music and improvisation. Their duo corresponds to a logic of magical thinking that is formed by deeper subconscious stirrings. Together, their percussive and subtle sounds wind in and out of synergy, sometimes clashing, sometimes relating in sublime synchronicity. Tickets are $15 General, $12 Student/Senior.

Thursday, July 27, Q&A 7:30pm Music 8:15pm:
Sheldon Brown’s Blood of the Air is a suite based on the poetry and speech melodies of Beat-era Surrealist poet Philip Lamantia. These composition feature a greatly expanded version of Brown’s working band and utilizes recordings of Lamantia reading his own work, with the pitches and cadence of the poet’s voice providing the raw melodic and rhythmic material, in addition to live readings by poet Andrew Joron and interpretations of Lamantia’s speech melodies by vocalist Lorin Benedict. Opening neem, a dynamic string duo featuring violinist Gabby Fluke-Mogul and double bassist Kelley Kipperman exploring compositional scores that take up issues of politics and poetics of bodies. Tickets are $15 General, $12 Student/Senior.

Friday, July 28, Q&A 7:30pm Music 8:15pm:
A night of Avant-Progressive and no-wave with Surplus 1980 founded in 2009 by former Sleepytime Gorilla Museum multi-instrumentalist Moe! Staiano. As alluded to in its name, Surplus 1980’s music takes cues from the angular bands of the 1980s and fuses it with the heavy, fierce attack pioneered by The Ex and The Fall to create their own blend of modern no-wave angst. Opening will be San Francisco based Voco pushing the edges of music and the conventional expectations drawing on an extensive wealth of musical and thematic influences and instrumental rock.
Tickets are $15 General, $12 Student/Senior.

Saturday, July 29 Q&A 7:30pm Music 8:15pm:
Spanning a career of over fifty years and counting, Karen Borca is the only Bassoonist who has made a mark in Avant-Garde Jazz and Free Jazz. She has played and recorded with some of the most important pioneers including Cecil Taylor, both as a member of his large ensembles and Unit from ’70-’89, Jimmy Lyons, for 12 years , Bill Dixon, Andrew Cyrille, and William Parker. Ms. Borca will be joined by Bay Area masters Donald Robinson on drums and bassist Lisa Mezzacappa. Oluyemi & Ijeoma Thomas of Positive Knowledge has recorded and performed together for the past two decades, composing and sharing their joyful “Creative World Music Systems” around the world. Ijeoma Thomas is a spoken word artist, poet, vocalist and teacher. Once quoted in the British magazine ‘The Wire’ as being “one of North America’s preeminent bass clarinetists”, composer, teacher multi-reed musician Oluyemi Thomas brings elements of life and work into his music.They will be joined by Bay Area drummer Hamir Atwal. Tickets are $15 General, $12 Student/Senior.