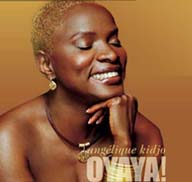 I first heard Angelique Kidjo during one of my visits to Montreal’s annual Festival d’Afrique. Here musicians from Africa, the Carribean, and the Americas, converge and for one week, every style imaginable, from Techno to Morroco can be heard. Kidjo, a fabulous singer from Benin, has attempted to prove that the world is “much smaller and far more culturally connected than it may appear”. Her music has been said to “glorify individual cultures while also underlining their universal similarities”. I concur!

Over the years, Kidjo, (a three-time Grammy nominee), has blended the West African traditions of her native Benin with elements of R&B, funk and jazz, as well European Pop and Latin American music. Embraced by the world artistic community, she has collaborated with many international musicians like Gilberto Gil, Dave Matthews, (in the duet “Iwoya,” from Black Ivory Soul), backing up guitarist Carlos Santana, and the amazing percussionist Trilok Gurtu, has helped bring her music to an even wider audience.

Her new album, Oyaya!, is the third part in a trilogy that previously explored African roots in music from the United States (Oremi, my personal favorite), and Brazil (Black Ivory Soul). This time around, Kidjo explores the musical links between her native Africa and the musical traditions of the Caribbean Diaspora. This latest album reminds me of the Cuban/African music of Africando or Orchestra Baobab!

With her husband, Jean Hebrail, Kidjo penned 13 original songs in a variety of indigenous Caribbean styles, including salsa, calypso, meringue and ska. She sings the numbers in English, French and African languages Yoruba and Fon.

Oyaya! was produced by Steve Berlin, whose production credits include Los Lobos, Los Super Seven, John Wesley Harding, Susan Tedeschi, The Tragically Hip, Crash Test Dummies and most recently the String Cheese Incident. The title of the CD is dedicated to the memory of Timothy White, Kidjo’s dear friend and a steadfast supporter of her career. If you haven’t seen or heard Angelique yet, she will be at the Fillmore on Geary Street in SF, June 10th. As my compatriot Mr. Preston often says, “Don’t Miss This!”