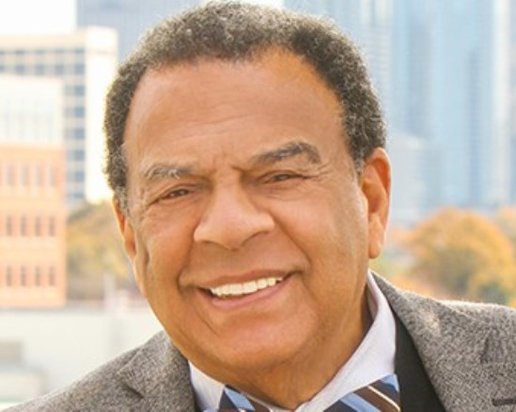 In his remarkable six decade career in public life, 82-year old Andy Young has been many things to many people: civil rights movement minister and courageous ally of Dr. Martin Luther King, Democratic Congressman from Georgia, U.S. emissary to the United Nations under President Jimmy Carter, two-term mayor of Atlanta in the 1980s, and then leader of the National Council of Churches.

On Monday night, he appeared before a largely African-American crowd at a “community dinner” in Richmond. It was sponsored by a 501 (c) (4) organization known as For Richmond, which dispenses grants to local non-profits like the YMCA. Young’s appearance showcased his most recent incarnation as a skilled, if not uncontroversial, friend of private enterprise, including some of the biggest firms in the world. The timing of his visit was not unrelated to Richmond’s upcoming municipal elections.

In advance publicity for the dinner, the guest speaker was identified as “Ambassador Andrew Young.” That’s a title he lost in 1979, when his United Nations-based outreach to Palestinian critics of Israel led to his forced resignation from the Carter Administration. Instead of dwelling on old war stories about his “mobilization of the Third World in the interests of the United States of America,” Young instead regaled his Richmond audience with colorful, if narcissistic, tales of economic revival in Atlanta under his city hall leadership.

In Richmond on Nov. 4, voters face a stark choice between two local mayoral candidates who have conflicting ideas about how to sustain Richmond’s recent renaissance—and even disagree on whether there has been one. Both contenders to replace Green mayor Gayle McLaughlin—city council members Nat Bates and Tom Butt–were present to hear Young’s thoughts about creating “a global community of peace, prosperity, and inclusion.”

Kyra Worthy, executive director of For Richmond, hailed Young’s visit as a “unique opportunity” to “learn how communities can economically flourish from the seeds of social responsibility.” In the printed program for the evening, Worthy thanked two major funding sources not always known for their corporate “social responsibility” on questions related to sugary drink taxation or refinery safety regulation. Both Coca Cola, headquartered in Atlanta and Chevron, based in nearby San Ramon, helped bring Young to Richmond.

As the city’s largest and, for nearly a century, most dominant employer, Chevron was clearly the senior partner in this joint venture. When For Richmond was launched, all of its $500,000 in start up money came from the energy giant, plus $100, 000 for grants distributed locally in 2013. As of a year ago, Chevron was still For Richmond’s only donor; the company’s other local philanthropy includes a pledge to spend $15.5 million on neighborhood programs and public schools over the next five years.

Meanwhile, down in Atlanta, the Andrew J. Young Foundation  displays, with equal pride, a familiar white and blue corporate logo on its website. A foundation official told me that Chevron provided $550,000 in funding last year, making it a “sustaining sponsor” more generous than mere “sponsors” like Lockheed Martin, Delta Airlines, Honda, Wells Fargo, Bank of America, Georgia Power, AT&T and others similarly situated on the Fortune 500 list. In its 2011 IRS filing, Young’s charity reported administrative costs and expenses three times greater than its total gifts and grants; Chevron’s donation was clearly a major boost to its bottom line.

Not surprisingly, Young’s rambling but entertaining after-dinner talk stressed themes dear to the heart of his major donor. Young also reinforced the campaign messaging of Nate Bates, our leading local beneficiary of Big Oil’s extraordinary largesse. Bates is the 83-year old African-American Democrat running to replace McLaughlin, a two-term mayor he has long accused of being unfriendly to business. Bates and three city council candidates favored by Chevron have been aided by $3 million in oil industry PAC money, making their own local fundraising almost unnecessary. (For details, see: http://richmondconfidential.org/2014/10/10/3-million-in-chevrons-moving-forward-war-chest/)

In his campaign for mayor, longtime Richmond city councilor Butt has questioned the traditional mindset of colleagues like Bates, whose first priority has always been “to take care of Chevron and developers and the industrial community.” As Butt explained to The Chronicle’s Chip Johnson in August, this “was Richmond’s version of the trickle-down theory.” He argues instead that, “the reason businesses come to a city is not because the council kisses their ass. They’re looking for amenities and quality of life because that’s what their employees want….And that’s what I’ve tried to do—make Richmond a place where people want to live.”

But, like Nat Bates at Richmond candidate debates, Young touted the virtues of tax breaks and incentives to attract job-creating foreign capital. “If Asian economies want to grow, what better place to create a business, educate your children or invest your money than right here?” he asked his Richmond crowd. When he was mayor of Atlanta, he reported, would-be investors from Germany, Holland, Japan, and other countries were told that, if they had any problems setting up shop, they should call him personally. “You don’t have to worry about the city council or bureaucrats,” he assured them.

“We’re not going to be able to raise taxes. People are paying enough in taxes,” he asserted on Monday night. “You can’t do [economic development] with government money. It’s got to be private-public partnerships.”

Who’s Selling Us Out?

In recent years, Young’s own lucrative partnering with global business has sometimes tarnished his reputation as an esteemed elder in the African-American community. As Bruce Dixon, editor of the Black Agenda Report, noted last year, one of “Young’s first big clients was Nike…Amid mounting public outrage over labor practices in its global sweatshop empire, Young ‘toured’ some of Nike’s Asian factories and produced a glowing whitewash report depicting happy and contented Nike workers sitting on porches strumming guitars.”

Then, there was Young’s short-lived stint as the chairperson of “Working Families for Wal-Mart.” On National Public Radio, Young claimed that this was “a citizen organization, though it’s funded in part by Wal-Mart and Wal-Mart suppliers.”  This was definitely not a group devoted to improving the lot of retail store employees, lacking job rights or benefits. Instead, Young defended their low-wage employer’s role in “generating new wealth.” He even insisted that Wal-Mart’s “pluses outweigh the minuses” in the area of health insurance (which remains unaffordable to many and was recently terminated for 30,000 part-timers).

Young was mainly deployed as a leading advocate of Wal-Mart’s urban expansion. His management-financed gig ended abruptly after he was interviewed, rather disastrously, by the Los Angeles Sentinal. In that widely-read African-American weekly, Young downplayed the negative economic impact of Wal-Mart on smaller, independent businesses located in older downtown areas and operated by immigrants.

“You see those are the people who have been overcharging us,” he told Sentinal readers. “And they sold us out and moved to Florida. I think they’ve ripped off our communities enough. First, it was Jews, then it was Koreans, and now it’s Arabs.” (For more on Young’s tawdry work on behalf of “working families,” see: http://www.alternet.org/story/33068/andrew_young%3A_shameless_son)

The only verbal gaffe he made on Monday night in Richmond was relatively minor and humorous indeed. As Butt reported the next day, Young spoke to a smaller, private reception before the main event at Lovonya DeJean Middle School. There, he related how, under his leadership, concerned citizens of Atlanta had forged a “progressive alliance” to help revitalize the city during the 1980s.  From Chevron’s standpoint, that was poor, if ironic, phrasing—not repeated later in Young’s after-dinner speech. In Richmond, a local Progressive Alliance has been challenging Big Oil’s agenda for the past decade and running candidates who may prove, in this election, difficult (or, at least, very costly) to defeat.

Writing last year about Young’s less distinguished service as a “high priced lobbyist, fixer and go-between for multinational capital,” Bruce Dixon noted that the former ambassador was “due for a rest.” The black journalist expressed the hope that “that he goes somewhere and sits down, before he can do any more damage.” Young was sitting down all right, as he addressed his attentive crowd of three hundred on Monday night, before exiting the stage slowly. But he sure wasn’t resting on his laurels as a pitchman for corporate America and, by implication on this occasion, for its well-funded Richmond mayoral candidate as well.

(Steve Early is a member of the Richmond Progressive Alliance and a supporter of Tom Butt for mayor of Richmond. He is the author of Save Our Unions: Dispatches From A Movement in Distress and other books. Early is currently working on a book about politics and public policy controversies in Richmond. He can be reached at Lsuport@aol.com)