Amidst Problems, Cafes, Apartments are Rising in SF’s Mid-Market/Civic Center 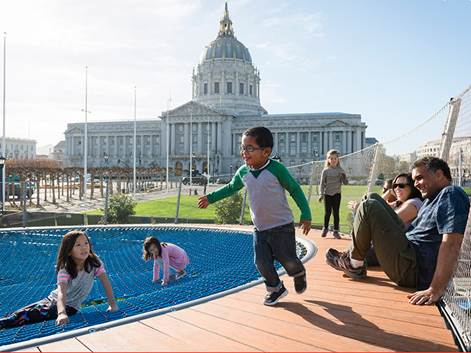 Having written a book refuting claims that Twitter’s arrival at 9th and Market Street “gentrified” Mid-Market and the Tenderloin, I’ve followed the recent stories about needles, feces and crime in the Mid-Market/Civic Center with a certain “I told you so” attitude. Much of the media bought the “tech has upwardly transformed Mid-Market”  hook, line and sinker, ignoring what their eyes showed them was actually happening on the street.

The truth is that Mid-Market’s problems never disappeared with Twitter’s arrival. And while needles and other problems are more visible than ever throughout Union Square, downtown and other neighborhoods, I would argue that Mid-Market and Civic Center are demonstrably better off today than in the recent past.

I was there last Saturday afternoon and the play areas were swamped. I heard that is true every weekend.

Ginsburg got the popular Bi-Rite market to open a café next to the playgrounds. While construction was delayed by rising costs, it’s a sure thing to happen. He also opened a human chess board for kids to play on (likely encouraging them to learn the game). Youth soccer is now part of Civic Center Park and there is even four times a week Zumba classes.

The Asian Art Museum in Civic Center not only has a major renovation happening but it enticed the popular Boba Guys team to open a restaurant in the museum. Called “Sunday at the Museum,” it is open daily and brings Civic Center the long sought destination lunch spot it  has long needed.

Mayor Lee made reviving Civic Center Park a priority. And it has happened.

Anyone walking through Mid-Market quickly sees the area’s problems. But the media’s highlighting of these problems has overshadowed if not ignored the positive developments.

The Proper has opened at 7th and Market and routinely has long lines for its rooftop bar. The Yotel hotel directly across the street will open this fall. The long disappointing retail space at the Twitter building, The Market on Market, is now booming. Construction is fully underway on the Shorenstein project that fronts Market at Jones Street. Staging for the demolition of 950-974 Market is underway, and the site will house a hotel and condos developed by Joy Ou’s Group I.

Whole Foods will open at the new Trinity Plaza at 8th and Market. It won’t happen until the housing and store are completed in 2021, but this does finally bring a supermarket to the area.

New condos have replaced the former Market Street Cinema at 1075 Market. And they are selling. The historic Hibernia Bank bordering market has been fully restored and is awaiting tenants.

A tourist hotel at 1055 Market has been approved by the Planning Commission and Pacific Eagle is moving toward approval of an exciting new hotel at 1125 Market. Tidewater’s apartment project at the former Hollywood Billiards site (and more recently The Hall) is expected to break ground this summer.

As the SF Chronicle’s  JK Dineen recently described, new spots are opening on long troubled 6th Street directly adjacent to Mid-Market. A winebar and Italian restaurant have opened on or near Market and Taylor and the most grandiose building of them all—the Golden Gate Theater—is quietly being restored to its historic luster.

Also waiting in the wings is the Better Market Street project, which begins actual construction in 2020. Check the website as you will be wowed by the plans.

These huge number of projects means little to those walking through Mid-Market today. But from the 1950’s through 2011, San Francisco city government did nothing to improve Mid-Market and actually took concrete steps (like removing facades and backing the demolition of the historic Fox and Paramount Theaters) to weaken the street’s economic vitality.

Mid-Market has launched more positive improvements in the last five years than in the preceding sixty. This does not excuse the current problems, but it shows there is a very bright light at the end of the tunnel.

Randy Shaw is Editor of Beyond Chron. He explains the decline of Mid-Market and the Tenderloin’s resistance to gentrification in The Tenderloin: Sex, Crime and Resistance in the Heart of San Francisco