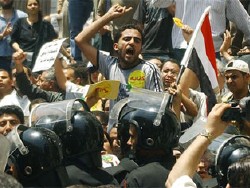 As we watch the crisis in Egypt from afar, the blog ThinkProgress reported on a disquieting statistic this week. While “growing income inequality” is a factor that contributed to Egyptians taking to the streets, the gap between rich and poor in the U.S. is actually far worse. According to the CIA World Factbook, the United States is ranked as the 42nd “most unequal” country in the world, whereas Egypt as the 90th. Meanwhile, American conservatives celebrated the 100th birthday of Ronald Reagan this weekend – who did more to exacerbate the gap in this country than any other President. As Joan Walsh wrote in Salon, “it’s difficult to overstate how much Reagan-era propaganda hurt the country. It distorted our understanding of how to help low-income people, as well as our optimism they could be helped, and it corroded the social contract that had prevailed since the New Deal.” And it now raises all sorts of questions.

The CIA World Factbook statistics (which can be viewed here and here) are imperfect statistically. Some countries have no data, and for those who do it is sometimes a case of mixing apples and oranges. For example, the numbers for Egypt are from 2001 – whereas U.S. statistics are from 2007.

Credit: the blog NakedCapitalism, at www.nakedcapitalism.com

But the overall picture, illustrated nicely on the chart below, shows a trend that can’t be ignored. Countries that have invested in a social contract for the poorest of the poor rank lowest, while the United States is down with Jamaica, Iran and Nigeria.

Forty-five years ago under President Lyndon Johnson, America was on track to fight war on poverty. But starting with Ronald Reagan’s tax cuts for the wealthy in 1981, we have only had a further acceleration of and disregard for the gap between rich and poor. In many ways, it is fitting that the protests in Egypt have occurred right around Reagan’s 100th Birthday. Obama is lucky that Americans don’t take to the streets, because the atmosphere over the last 30 years has made it ripe for what we see in Egypt.