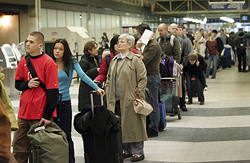 With health care, global warming, gas prices, the housing crisis and Iraq dominating the presidential race, why aren’t candidates talking about deteriorating airline service? The problem hit home for me this weekend, when my flight out of Boston got canceled – and all United could do was put me on a flight 24 hours later. They wouldn’t give me a hotel room, because the cancellation was “weather-related” – which wasn’t exactly true. It was due to airlines over-booking flights to the extreme, having their crew fly multiple flights in a day, laying off crew so they don’t have anyone to fly their planes, and not preparing for basic slip-ups that create a ripple effect on passengers. Wasn’t deregulation supposed to improve air travel? Didn’t the airline industry get a $15 billion bailout after 9/11 for companies to stay in business? Shouldn’t consumers deserve better after paying a fortune to fly these days? And why aren’t politicians being held accountable for it?

Everyone complains about air travel these days. “It’s summer,” said Joe Sharkey in the last week’s New York Times. “Air travel is bad. It’s getting even worse and won’t improve anytime soon. And there is absolutely nothing you or I can do about it.” According to Sharkey, most major airlines are proposing even further cuts in October – such as reducing seat capacity and reduced flight to some markets.

United Airlines will say that my flight was canceled for “weather problems” – but that’s not really true. The plane was physically at the airport, and flights were leaving Boston without a hitch. But the crew scheduled to fly my plane was in Washington DC (after having flown an earlier flight), and a rainstorm was holding them back. The plane could have technically left on time – if they had enough crew members around to fly it.

Then you have every flight booked to its maximum capacity – so even one cancellation can create utter chaos. Most flights were leaving Boston that night, so they could have put me on another plane. But after standing in the customer service line for an hour to get re-assigned, the only flight for San Francisco still available was on the following night. As for flying to Oakland, my option was to take a Denver flight the next day and change planes – which I opted not to risk.

I know that times are tough. While motorists suffer at the gas pump, airlines are stuck with the rising cost of fuel. But with a deregulated airline industry (which started in the late 1970’s to “increase consumer options”), nobody is protecting consumers from getting ripped off – as we expect them to pay even more for flying. And if there’s one small slip-up that’s practically inevitable or at least predictable, consumers are simply “out of luck.”

Besides the rising cost of buying a plane ticket, companies have nickel-and-dimed even basic services we all once took for granted. After airlines started charging $25 for the second checked bag, American Airlines raised the stakes by charging $15 for the first checked luggage. And the days of a free meal on the plane are over – now you have to pay $7 for a cheap sandwich wrap.

But airlines shouldn’t cry foul. Right after September 11th, they convinced Congress to bail them out for $15 billion – ostensibly to keep them from going bankrupt and help the economy stay afloat. But only $5 billion went as direct cash payments to airlines (who didn’t have to prove they were hurting), while $10 billion went to loan guarantees. Some went to companies that had long been bankrupt before 9/11. Taxpayers footed the bill, while airlines are still broke.

Now we’re in a recession. Banks have foreclosed on first-time homebuyers who are left homeless. Oil companies make huge profits while people can’t afford to drive to their jobs. Health insurance companies make a killing off patients who can’t afford their bills. And airline service has deteriorated – making it harder for families to travel distances on vacation, and for companies to send employees out on business trips. Just like banks, oil companies and insurance companies, airline companies are still making a profit – with no oversight to ensure they’re held accountable.

Before he ruined his reputation on multiple vain presidential runs, Ralph Nader made serious progress in the 1970’s for the rights of airline customers by suing plane companies that ripped them off. Today, we’re in dire need of similar advocacy – as airline service has once again deteriorated. Barack Obama and John McCain should be talking tough about this issue, proposing an “Airline Consumer’s Bill of Rights,” demanding an end to costly bailouts – and insisting on tough regulation that will hold these companies in line.

Because at the rate things are going, it’s simply unsustainable.