Americans and the European Way 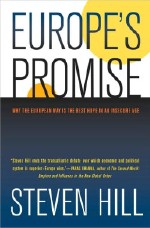 Michael Moore’s Sicko shows the director in France talking to American expats about the French health care system. They describe the great benefits that French residents take for granted, expressing dismay that no such benefits are legally mandated in the United States. Moore then asks why Americans so dislike the French, and posits it may be out of envy for a state that provides a superior quality of life for the average person.

Steven Hill’s Europe’s Promise expands Moore’s analysis to show how the social and economic policies of the “European Way” are superior to the United States in virtually every area. This includes health care, democracy, worker rights, energy efficiency, education and, most compellingly, the social safety net of child care, mandatory vacations, and parental and sick leave. Hill has essentially written a “Case Closed” for European capitalism’s superior ability to distribute benefits to a broader stretch of the population. Yet Americans may not be interested in this message.

Steven Hill is affiliated with the New America Foundation and is widely known for his opinion pieces on ranked choice voting and other reforms to local, state and national political systems. I had no idea prior to receiving his new book that he was also an expert on European social policies. Since Hill knows how to write short, punchy pieces, Europe’s Promise is very well written and reads like a series of magazine articles and Internet columns, greatly benefiting his arguments.

Hill points out early in the book that much of what the American public believes about Europe is wrong. For example, while European nations are routinely viewed in this country as “socialist,” Hill shows that most are as capitalist if not more so than the United States. The difference then is not between socialism and capitalism, but rather between two types of capitalism.

Europe spreads the benefits of capitalist systems widely, so that the average person gets legally mandated paid sick leave, paid vacation, subsidized child care, guaranteed pensions, free health care, and a whole host of benefits that Americans have been taught are only available in undemocratic, Soviet-style “Socialist” societies. In contrast, the American capitalist system allows the wealthiest 1% to control the nation’s riches, as most voters operate via an “every person on their own” mantra that denies government assistance to the average resident.

Americans are also taught that Europeans only gain such benefits through high taxes. But as Hill shows in his chapter, “The Myth of the Overtaxed European and other Modern Fables,” such claims erroneously compare relative income tax rates while ignoring what American’s pay in local, state, and higher real estate taxes. It also ignores the huge fees, deductibles and premiums that Americans pay beyond taxes, such as for education and health care. Hill notes that Europeans have a higher savings rate than Americans, undermining the view that they have little money available due to high taxes.

And while Americans love to talk about their commitment to “family values,” Hill shows that we have the most anti-family policies in the industrial world.

What does it say about American family values that we are one of only 5 countries out of 173 that do not guarantee some form of paid maternity leave? Even more shameful is that the other four are the impoverished African nations of Lesotho, Liberia, and Swaziland, along with Papua New Guinea.

Hill offers dozens of such examples. He also emphasizes the often-overlooked point that United States unemployment rates are higher than stated due to our prison population of over 2.3 million; such prisoners are excluded from the official unemployment rate.

Hill makes such a persuasive case that midway through the book even readers who began with an open mind should be completely convinced. But the question that nagged me throughout was whether the unconverted will pick up the book, or whether he will only be speaking to those who already agree with him.

As someone who thinks Hill’s work could convince the uncommitted and deserves the widest possible audience, I wish he had directly confronted — through interviews, for example — those who oppose the policies that work in Europe but are still not in place in the United States. For example, it would have been helpful for Republican and Democratic Party political leaders to explain why our nation follows the lead of Papua New Guinea in still not offering paid maternity leave.

Or to ask allegedly progressive Democrats why they continue to fund the military at the expense of human needs and the causes they claim to care most about.

Similarly, while Hill’s last section discusses Europe’s immigration and civil rights problems, he could have more fully addressed the widespread American view that Europe is not a model because its population is far more racially and ethnically homogenous. Further, Hill follows the path of other progressives in citing forward-thinking policies in Sweden, Norway and the Netherlands, but examples from these small, overwhelmingly white countries do not resonate with most Americans (recall how Sweden’s great social safety net is diminished by reference to its allegedly high suicide rate).

Hill provides abundant evidence that European social policies produce healthier and less-stressed people. He depicts an America governed by utterly irrational policies that sacrifice the common good for the benefit of the elite.

Ultimately, Hill’s book provides a roadmap for where many thought President Obama wanted to take the United States. Sadly, it increasingly appears that our nation’s enactment of the socially just policies of the European Way awaits the election of a more courageous and visionary leader.