America (The Book), by Jon Stewart 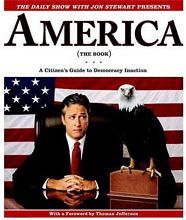 On a recent trip to the hot tubs of Calistoga, I came across a hilarious book amid the sulfur steam, Jon Stewart’s “America, (The Book)”. When I returned home, my friends back in D.C. called to tell me about a local High School that even uses the book to counter point the historical and fictional accounts of our nation’s past. Alex Mazerov, of Silver Spring, Maryland’s Montgomery Blair High School, wrote this review.

“The Daily Show with Jon Stewart” couldn’t be more popular. Comedy Central’s irreverent masterpiece is the new “it” gig on the talk-show scene, and the program consistently offers the best political humor on television. In “America (The Book): A Citizen’s Guide to Democracy Inaction,” Stewart and his band of talented scribes try their hands at printed satire. The result is a laugh-out-loud textbook spoof that explores reasons why concepts like “One man, one vote,” “Government by the people” and “Every vote counts” have become such popular urban legends.

“America” sarcastically parodies a civics textbook down to the last detail. The book tackles every prevalent issue of American government. “Democracy Before America,” the founders, “The President: King of Democracy,” “Congress: Quagmire of Freedom,” the judiciary branch, elections, “The Media: Democracy’s Valiant Vulgarians,” “The Future of Democracy: Four Score and Seven Years from Now” and “The Rest of the World: International House of Horrors” each headline a chapter.

Each section contains “Discussion Questions” (for example, “What the hell does it mean to ‘rock’ a vote? Can a vote be R&B’d? Singer-songwrited?”) and “Classroom Activities” (“Disenfranchise a black student.”) Flashy sidebars, clever captions, eye-popping graphics (including a chart depicting ”Growth in Misleading Charts”) and other visual uproar also mimic an actual textbook. “America” even includes “Historical Documents,” including a Vice Presidential Welcome Letter, a memo handed down from each number-two man to his successor preaching friendly advice (“Just remember, shave for the State of the Union. You have to sit behind the president for that one.”) The book features a pullout boxing poster advertising “Skull vs. Bones,” with President Bush and Senator Kerry facing off.

“America” makes fun of everyone and everything, from the Electoral College to Fox News Channel and the Founding Fathers. A special election guide spoofs both Bush (“Hurdling the lowered bar”) and Kerry (“Monogrammed for greatness”). In “The Tale of the Tape,” the book contrasts the two Yale grads. While Kerry was awarded a Bronze Star, Silver Star and two Purple Hearts for his service in Vietnam, Bush, the book reads, won the “Dannelly Air National Guard Base ‘No new cavities award.'” The section also describes each man’s stance on important “issues” and the source of each contender’s wealth. Both candidates are for “bringing it on” but have a different “viscous substance underpinning personal fortune” (oil for Bush and ketchup for Kerry).

“The Daily Show” “correspondents,” Stephen Colbert, Rob Corddry, Samantha Bee, (my favorite), and Ed Helms, add their own quips to the mix. Bee’s “Would you mind if I told you how we do it in Canada?” is an entertaining explanation of how they do things up north. “Our style of revolution,” she writes, “centered less on bloodshed and guerrilla warfare and more on the time-tested strategy of ‘not making a fuss.'”

Through its eye-rolling sarcasm, satiric comprehensiveness and brilliant political lampooning, “America” hits the mark and the funny bone. The book’s real joke, however, is that it is more revealing about the workings of American government and culture than the authentic textbooks it mocks.