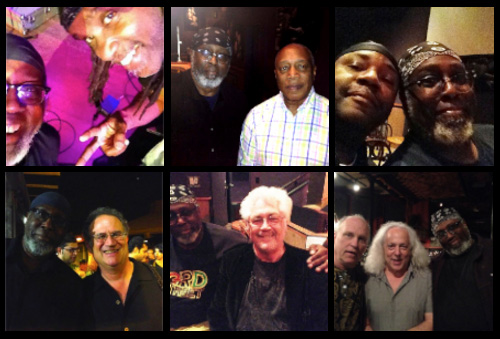 Well gentle readers, as another year draws to a close, it’s time to look back on a few musical moments that made me smile in a world often plagued by strife. Someone once wrote that “Music “has the power to make men (and women) happy…” As the Arts & Entertainment editor for Beyond Chron, I’ve been fortunate to have seen some incredible shows, meet and interview some wonderful musicians, and hear some equally amazing music. Here’s a look back at a few of my personal favorites.

The year began with an assortment of great shows; The prog rock trio known as the Aristocrats are some of the most talented musicians you will ever see, hailing from the UK (Guthrie Gowan), Germany (Marco Minneman), and the USA (Bryan Beller), and their double bill in LA with Tony Levin, Markus Reuter and Pat Mastelotto’s Stick Men left me speechless.

Local bassist Kai Eckhardt emerged with a fabulous new band and album in Vallejo, in tandem with bassoonist Paul Hanson and bassist Ariane Cap’s wonderful duo known as “Oon“. Kai is one the world’s greatest bassists and it is a real treat to be able to see him locally, especially in the company of other, equally gifted musicians.

Keyboardist Marco Benevento returned to the Independent in stellar form; Steve Wilson’s phenomenal “Hand. Cannot. Erase…” tour at the Warfield was spectacular; The SF Symphony launched their new, state-of-the-art venue SoundBox. If you haven’t seen any performances there, mark it down on your calendar, because there is nothing like it on the west coast, with commissioned works by some of the best modern composers and curators on the planet.

With Yoshi’s in San Francisco sadly closed, it’s back to Oakland for jazz lovers. Fortunately there has been a wealth of great acts to roll through; Billy Cobham’s Spectrum 40; Larry Coryell, Victor Bailey and Lenny White; Simon Phillips and his Protocol III band; guitarist Allan Holdsworth; saxophonist Jeff Coffin and fellow Flecktones alum Roy “Futureman” Wooten, to name but a few…

The local rock, jazz, pop and avant garde scene still survives despite the loss of more venues; Camper van Beethoven’s Victor Krumenacher, Allen Clapp and his Minty Fresh/Mystery Lawn label mates continue to rock on; Edgetone Records and the Outsound New Music Festival looks to return even better than ever; Pamela Z and her forward thinking compositions and stellar musicians remain a must see event; the prolific Pc Munoz is seemingly everywhere, pushing the boundaries of electronic grooves and classical musicians; and composer keyboardist Steve McQuarry looks to return to SF Jazz, (one of the few local musicians to grace the mainstage), following his successful “Living Tribute to Carla Bley” with a tribute to the great Bill Evans.

Speaking of SF Jazz, it still remains one the last major venues for top-flight jazz shows in San Francisco; Wayne Shorter, Chick Corea, Hiromi, Bela Fleck, Zakir Hussain, Joshua Redman, Snarky Puppy are just a few of the greats to perform there this year. The Regency, the Warfield, the Great American Musc Hall, the Masonic, and the Fillmore look to continue their mix of rock, pop, and prog.

There are still some challenges ahead for musicians; shrinking venues; the inadequacies in the world of streaming so vividly described by Anil Prasad of Innerviews; the struggles of the venerable Cadillac Hotel; and what in the world is going to happen to the old Yoshi’s on Fillmore?

I guess I’ll have to look into my crystal ball for that one. There have been many, many more shows, both local, national and international that I’ve seen this past year, or have been fortunate to be a part of, so forgive me if I’ve left anyone out. In the meantime, get out there, support your local artists and most of all enjoy! See you next year!