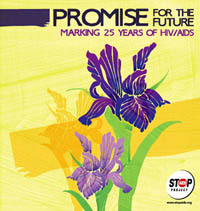 The StopAIDS Project in San Francisco recently hung 90 huge handmade paper irises on shop awnings and telephone poles throughout the Castro to mark the upcoming 25th anniversary on June 6 of the reporting of the first AIDS cases by the Atlanta-based Centers for Disease Control. As part of this installation, the flower shop Ixia put up a 43-foot-long display of these same irises on the corner of 18th and Castro. The flower was chosen in part because it was the favorite of the ancient Greek goddess of the rainbow. The theme of the display is simple: a renewal ofthe LGBT’s community’s commitment to stopping AIDS.

With an equally stunning visual, a billboard campaign by the AIDS Housing Alliance (AHA) called the “Faces of Eviction” also debuted in the Castro. It spotlights people with AIDS who have been evicted from their longterm apartments in the Castro and elsewhere. It can be seen at the MUNI underground stop at Castro and Market. Featuring large head shots of evicted tenants, the billboard proclaims that “people with AIDS who lose their homes die five times faster.” This campaign’s theme is simple: Poor and working-class people with AIDS have been abandoned–with deadly results.

The two efforts are indicative of the schizophrenic nature of the politics of AIDS in liberal San Francisco.

Despite all of the wealth in other parts of our LGBT community, poor and working-class people with AIDS live in some of the most rundown housing in San Francisco. They often don’t have money for rent, let alone food and medication. They die homeless on the streets. They are evicted from their long-term, rent-controlled places so that upper middle-class gays and can buy their apartments as tenancies in common (TICs) or pseudo condos. In 2005, 55% of the TIC evictions in the Castro were “protected” folks, including people with AIDS. According to AHA, the Castro represented 25% of all TIC evictions last year. The sheer number of these evictions prompted the AHA to call the Castro “the AIDS eviction capital of the world.” Mainstream AIDS organizations seldom acknowledge this incredible disparity between the haves and the have-nots.

It’s the reason I feel uncomfortable with brightly colored irises marking the 25th anniversary of a disease that claimed so many of my friends in the 80s. Twenty-five years of AIDS should not be a Hallmark moment or a “feel good” fest for the tourists. It shouldn’t be about designer flowers or even politicians at an official city commemoration patting themselves and each other on the backs while a couple blocks away poor people with AIDS struggle every day to survive.

This anniversary should be a time to reflect on where we’ve come from and where we still need to go. A time to admit that as a City we have failed in providing adequate affordable housing for people with AIDS. A time to say that it’s unacceptable that PWAs live in poverty while other members of our community wallow in wealth and privilege. A time to commit ourselves to ending poverty and economic inequities for all people. A time to honor the thousands of brave activists who took to the streets in the 80s to fight against the all-pervasive uncaring attitude of our homo-hating culture. The millions whose Herculean efforts gave us safe sex guidelines, medical marijuana, HOPWA vouchers, AIDS hospices, the American with Disabilities Act, etc. A time to remember the AIDS tent city that stood for years at U.N. Plaza right here in SF. Where is the tribute to all of that?

Twenty years of AIDS and all we get is a lousy blue iris.