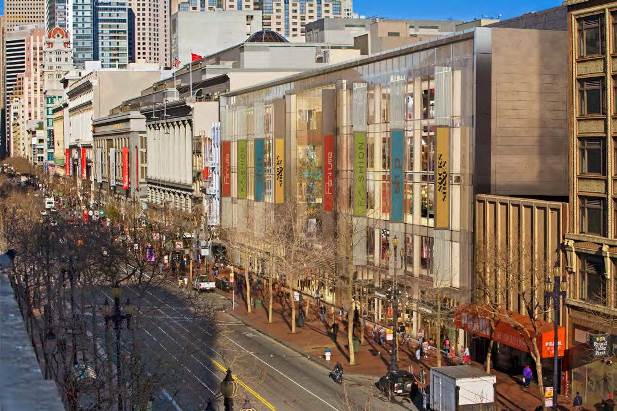 In the past two weeks, the two most important dormant sites in Mid-Market announced plans to begin construction. This cements the area’s resurgence.

San Francisco’s Mid-Market neighborhood has seen massive investment in recent years, but until recently two of its most important sites were empty. Market Street Place, which many of us saw as key to the area’s revival prior to anyone talking about Twitter, was an entitled project that was not going forward due to the lack of an anchor tenant. The Grant Building was in the hands of a family that lacked the development expertise to fulfill its dreams, turning an architectural gem of a building into a boarded up eyesore at 7th and Market.

Today, both projects are moving forward. And when added to the ongoing renovations at the Hibernia Bank and Renoir Hotel, the area around 7th and Market—perhaps the street’s most troubled stretch—-we may finally see the area become a place for people to enjoy rather than avoid.

Cypress Equities, owner of Market Street Place, is now commencing construction despite lacking tenants. That shows confidence in the area.

Developer David Rhodes’ original vision for the formerly named CityPlace was for a shopping center for the middle and working class. This avoided competition with the nearby Westfield Mall, and expanded Market Street’s retail options further west.

But as I described in a February 11, 2014 article encouraging George Lucas to consider opening his museum at the site, changes in buying habits impacted Market Street Place’s economic strategy. National chains like JC Penney which once seemed a good fit for the site have suffered continued losses through increased online shopping. Earlier this year it was even rumored that the owners would sell the site to a housing developer, which would have kept a huge swath of Market Street vacant for at least five more years as the new project went through the entitlement process and was then constructed.

That unfortunate scenario has now been avoided. And as the project moves toward completion, there is no way retailers will allow a site at the center of one of the city’s leading transit hubs to sit vacant.

The other unfortunate scenario Mid-Market has now overcome is a continued lack of progress at the Grant Building, 1095 Market. I became enamoured of the Grant Building when representing all of the tenants facing eviction there in 2000. We stopped that round of evictions, but the building was later vacated by a new owner who sought to convert the historic offices into an “adventure travel” hotel.

I told these owners every chance I got that there plans for the building made no sense. Despite their assurances to the contrary, the sale of the property to Synapse Capital, a company that will team with London’s Yotel to develop and operate the property, shows that the former owners’ could not fulfill their ambitious plans.

Credit to the mayor’s office for setting a deadline for the Grant Building’s entitlements, which forced the former owners to either quickly move forward on construction or sell. Absent such action, the building could have sat vacant in its current boarded up state for another few years.

I’m not a huge fan of Market Street becoming a tourist hotel mecca, but since the Grant Building got planning commission approval for this use it was never going back to offices. The new owners will convert the offices into 170 square foot hotel units, based on a successful New York City model. They hope to bring to Mid-Market a unique niche in the city’s booming tourist trade.

The Core of Mid-Market

The Market Street Place and Grant Building projects are particularly important because they impact the most populated part of Mid-Market. Seventh and Market is the exit for many of those arriving to the area via Civic Center Muni or BART. When they then confront public drug dealing, a supermarket for stolen cell phones, and rundown commercial spaces, these visitors do not look forward to returning to the area.

For all of the attention given to Twitter’s tenancy at Market Hall, the area between 9th and 10th Streets on Market has never suffered from the above problems. Tackling Mid-Market’s core challenges means addressing 5th to 8th Streets, which Market Street Place, the Grant Building, the Hibernia Bank, and Renoir Hotel (the latter two are currently under renovation) all do.

Add the future housing to be built on the Shorenstein site at 1066 Market and the former Hollywood Billiards at 1028 Market, and all the ingredients are in place for the long overdue positive transformation of Mid-Market’s most challenging area.

If there is any other part of a major city in the United States that has seen such progress in such a short time without any government redevelopment, I am unaware of it. And unlike other urban renewal schemes, Mid-Market’s revival required neither residential tenant displacement nor destruction of sound historic buildings.

The only remaining piece of the Mid-Market puzzle that still needs work is UN Plaza. It’s not that the mayor’s office, community groups, and concerned people are not focusing on the Plaza; to the contrary, there are ongoing meetings and SF Beautiful just completed a survey for the area’s desired uses in which 270 people backed Pop-Up Concerts, 253 favored Plaza Movie Nights, 176 – Plaza Workouts, and 174 – Game Days for All.

I like all of these ideas and more. But what UN Plaza needs most is a financial donor who will invest to support such activities as well as fund planters and other design improvements for the space.

There are a lot of people with money around Mid-Market these days, and it only takes one major donor to transform UN Plaza into the great public open space the city deserves. Perhaps the area’s renewed resurgence will inspire such a gift.