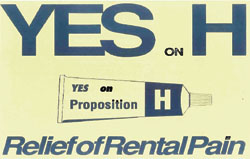 Twenty years ago this week, something unprecedented happened in San Francisco: annual rent increases for tenants covered by rent control were cut more than half. Prop H on the November 1992 ballot stopped landlords from imposing guaranteed minimum 4% rent increases that were double or triple the inflation rate, and to this day is the single biggest factor enabling low-income rent controlled tenants to stay in San Francisco. Prop H followed a landslide tenant defeat in the November 1991 election, and its grassroots campaign overcame a 10-1 spending differential to become the city’s first winning tenant ballot measure. Prop H also brought the biggest progressive redistribution of wealth from landlords to tenants in San Francisco’s, and likely the nation’s, history. It offers an inspiring story of how activists can challenge seemingly insurmountable odds to achieve meaningful change.

Rents are “skyrocketing” in San Francisco. We see long lines of prospective tenants competing for units, and vacant studio apartments for under $1200 or two-bedrooms under $2000 are rare.

Yet rarely mentioned is that the estimated 200,000 San Francisco tenants in place—whose numbers greatly exceed the number of annual vacant units– are paying the lowest annual rent increases in the United States. Since Prop H’s implementation in December 1992, these increases have largely been under 2% and in many years under 1%. These low increases keep thousands of low-income tenants in the city who could never have afforded to stay if forced to pay the guaranteed annual 4% increases in the pre-Prop H world.

Every San Francisco tenant under rent control benefits from Prop H once they have lived in their home for one year. And over twenty years, that’s a lot of people and a lot of money tenants have saved.

That’s why the cumulative and ongoing Prop H tenant savings reaches the billions of dollars. And as starting rents have skyrocketed, Prop H’s savings on the annual rent increase amounts is even greater.

Prop H came on the heels of a staggering tenant defeat on a referendum on vacancy control In the November 1991 election. I saw the defeat as a strategic rather than substantive failure. As articles proclaimed the death of the city’s tenant movement, I was quoted to the contrary, and vowed to place a winning tenant ballot initiative on the November 1992 ballot.

A landlord attorney was not impressed. He described me in the newspaper as “the mouse that roared,” which reflected the confidence/arrogance many landlords had at the time at their ability to defeat tenants at the ballot.

The tenant movement’s problems had been obvious for some time: it was controlled by people who lacked a grassroots base that could be mobilized. Meanwhile, the tenant counseling groups that had such a base had much less influence. The San Francisco Tenants Union was not even in the picture, as it was deemed “too radical” by the mainstream tenant leadership.

I felt it imperative that we shift control of the city’s tenant movement to the counseling groups that connected to tenants on a daily basis.In early 1992, the counseling groups convened a series of neighborhood conventions to elicit grassroots interest in a November initiative. This process brought out people who had not previously been contacted by the tenants’ movement, and energized the staff and volunteers of the existing groups.

The overwhelming winner at the convention was a proposal to replace the guaranteed annual 4% rent increase with an annual increase based entirely on 60% of the inflation rate. In effect, the Prop H campaign involved deleting four words – not less than 4% — from the existing city rent control law.

When we prepared the Proposition H campaign, we immediately thought of Preparation H, the then-legendary hemorrhoid ointment. We all had a great laugh about how we could use the widely known “Preparation H” to campaign on the theme “Yes on H: For Relief of Rental Pain.” And our first literature piece featured a woman doctor “prescribing” Prop H for the city’s voters.

Prop H has to be the only campaign in San Francisco history where both sides used the same imagery. Jack Davis was running the anti-H campaign and he also liked the Preparation H connection. Davis got billboards and bus shelter signs put up around the city with his own ointment tube urging a “No” vote.

Local media attacked Davis for the crude connection between the ointment and the ballot measure, but never noted that we had used the image first—that’s how far under the radar screen our campaign was operating (The No on H bus shelter signs mysteriously disappeared soon after posting as did the replacement signs, so the opposition’s campaign was less highly publicized than it hoped)

Prop H was the first tenant campaign to run on a broader economic justice message. We ran on the Clinton-Gore platform of “economic fairness,” and highlighted the San Francisco Republican Party’s opposition to Prop H. We did a huge lit drop asking why the Republican Party was so strong against Prop H, and linking opponents of Prop H to Republican President George Bush.

Unlike prior tenant campaigns, we geared much of our message to homeowners, who we thought would respond to economic fairness appeals. We did better among homeowners than any tenant campaign in history, which is why we won.

The Prop H campaign was primarily funded by the Tenderloin Housing Clinic (which I head and which publishes Beyond Chron), and we were outspent $300,000-$25,000. But we had people walking the streets day and night handing out literature (we couldn’t afford mailings), and because we had an army of SRO tenants who were not employed, we could drop literature seven days a week, as opposed to just on weekends.

The daily droppings meant that we were the only piece of literature voters got that day, as opposed to the deluge of stuff left on doorsteps on the weekends.

Prior tenant initiatives had tried to beat landlords at their own game of glossy mailings. We relied entirely on people power, and handed out half-sheet flyers at senior centers, MUNI stops, and anywhere else voters gathered.

Prop H is the reason so many San Francisco tenants have rents well below the current market.

Prop H reconnected the San Francisco Tenants Union to the city’s tenants’ movement, and paved the way for the SFTU’s Ted Gullicksen to spearhead the victory of Prop I in 1994, which finally brought owner occupied buildings of four units or less under rent control. Before Prop H it was said that tenants could not win a San Francisco ballot measure; since Prop H, tenants have rarely lost.

The San Francisco Chronicle never covered Prop H’s victory after the election, and the day after paper showed Prop H losing in partial returns. The media has ignored Prop H’s role in ensuring lower (and fairer) annual rent increases for San Francisco tenants to this day. Some tenant advocates feel that acknowledging that tenants in place are not experiencing “skyrocketing” rent hikes weakens political support for stronger tenant protections.

But San Franciscans recognize, as the recent passage of Prop C creating an Affordable Housing Trust Fund showed, that rents on vacant units larger than studios are exceeding what low-income and working class people can afford. They also know that longterm tenants are still at risk from Ellis Act evictions.

Prop H showed what tenants and those seeking greater economic justice in all fields can accomplish against seemingly insurmountable odds. Its legacy goes beyond the billions of tenant dollars saved, as it was the critical action needed to keep longterm low-income and working class tenants in San Francisco.