Afghanistan: No Exit Plan, No Exit, No End 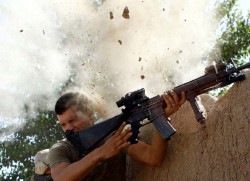 Still Crazy After All These Years

There may be 50 ways to leave your lover, but our government can’t find one to quit Afghanistan. Nor propose a truce. Nor, after seven brutal years, disclose an exit strategy, despite recent legislation from fed-up House Democrats.

What a troubling paradox: the charismatic anti-war candidate, riding enormous disgust against one “dumb” Bush war into the White House, unilaterally expands bloodshed to a more resistant, hardly “smarter” conflict. If the puzzling Obama Afghan war cry was to immunize a campaigning peacenik against rightwing security tirades, the surge worked twice: the winner looked and sounded tough and now, as a War President commands more war support from the GOP than divided Democrats.

Invisibly, last week President Obama forces repelled (by a 2-1 vote) demands by House Democrats insisting on an exit plan, thus embracing the Bush legacy that surges are easier to sell than peace talks. This defeated amendment set no terms or timetable, but the notion of accountability offended leadership in both parties and the White House. Afghan democracy also took a blow, as 80% there view Coalition troops as wedge, not bridge to truce.

Am I alone wondering how Obama, an obscure, unbriefed state official in 2002, rightly saw through one bad war in Iraq, yet now applies the same logic to a stalemate unwinnable by military means? Just as Bush throttled Congress with his imperial, miserably justified war, is not this White House trumping both open debate and Congressional opposition by staying the course and not explaining why? The President is more than restarting Afghanistan but reformulating, in Andrew Bacevich’s words, “Operation Enduring Freedom” into “Operation Enduring Obligation.”

Is it so unnerving to give Congress a basic war roadmap, especially in a country itself without a national road system? In fact, 121 peace Democrats echoed this very president, who in March committed to “finish” the job and provide a plan: “There’s got to be an exit strategy. There’s got to be a sense that this is not a perpetual drift”? Does now rebuffing an exit strategy demonstrate secrecy or subterfuge or no one has a clue? Which is worse?

Blessed are the peacemakers, but all are AWOL in Afghanistan, like assurances more force equals progress. Most underwhelming is Britain’s top commander, Gen. Jim Dutton, who denies a “losing campaign,” despite “stalemate in the south” in which “neither side could progress much.” Dead ends after seven years, billions of dollars, and thousands of dead bodies equal losing, whatever the spin. Our great military chieftain, David Petraeus, likewise rationalizes the dim light at the end of the tunnel: “hard is not hopeless.” Say what?

Reinvading is Staying the Course

Hands, please. How many cheer on this unending quagmire in a distant country not threatening our security, with greater troop hazards than Iraq, a more corrupt government than Iraq’s, and nary a chance for centralized, democratic control? This war projects out another decade, 1000 more American deaths, and one trillion dollars. “Success” means a decimated country with the instability of Chad or Bangladesh, with exiled insurgents flooding Pakistan, thus destabilizing a huge, nuclear country far more critical to us and ready to implode.

So, Obama being smarter than Bush means justifications will be smarter? Not so, as presidential language overlaps, the latest ploy to make “sure al-Qaeda cannot attack the U.S. homeland and US interests and our allies. That’s the number one priority.” Yet this Obama claim misleads badly, as Petraeus himself verifies al Qaeda in the main has flown this coop. Considering the frenzy around Bush-Cheney’s Iraq surge, what keeps today’s bold expansion on the back burner, even off the stove? America doesn’t merit an updated sales pitch, one that distinguishes this assault from the historic parade of failed Afghan invasions. Bush had to say more.

Certainly, change is afoot because the administration abruptly switched to Gen. Stanley McChrystal from super-secret Special Operations – spanning hidden detention, secret raids, torture, and assassination. Remember, Bagram, the uncelebrated Guantanamo, is nearby, and McChrystal was implicated in abu Ghraib and the disgusting Tillman propaganda cover-up fiasco. Projections are nastiness won’t end but will flee the spotlight, along with bad press from incendiary civilian casualties. Silence doesn’t, however, answer savvy D.C. insiders, like Leslie H. Gelb: “We can’t defeat the Taliban in Afghanistan . . . most Taliban are members of Afghanistan’s majority tribe, the Pashtuns,” rather than al Qaeda, and they come and go with ease.

What a Choice: Stalemate or Sinkhole

Oddly, the Afghanistan surge, tactically and conceptually, thus presents a sometime anti-war Democrat confirming the regional, neo-con Bush mindset. Bagram, depicted as a “legal black hole” of a secret prison with mounting reports of abuse, completes the picture. Drone attacks continue, civilians perish, and the war just easily got re-funded, as if taking place on another planet.

Many voices, like retired Army Colonel Andrew Bacevich, reject the buildup as the wrong force misapplied to a political dilemma: “Afghanistan will be a sinkhole, consuming resources neither the U.S. military nor the U.S. government can afford to waste . . . To risk the stability of that nuclear-armed state [Pakistan] in the vain hope of salvaging Afghanistan would be a terrible mistake.” See also Dan Froomkin’s excellent wrap-up in the Washington Post.

Obviously, our wary President knows more than he’s saying (practically nothing), beset worrying about loose Pakistani nukes and who knows what else. But we know this: Bush is smiling, for by fulfilling this campaign promise, Obama validates the Bush Doctrine, especially “staying the course” with permanent, failed wars of choice. Like Iraq, the issue isn’t our being driven out but another leap of faith into militarism. When do we give peace a chance? Did the Obama majority endorse more grueling years trapped in a tribal grudge match for which the likely outcome is a bloody tie? I recall the sports cliché about tie scores, especially for boys: like kissing your sister.