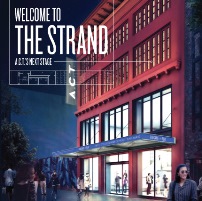 The American Conservatory Theater (ACT) broke ground yesterday on its groundbreaking project to transform the former Strand Theater at 1127 Market into a 300-seat theater along with a 120-seat black box performance space and café. ACT’s bold venture is the cornerstone for reviving the long dormant stretch of Market between 7th and 8th Streets. San Francisco Mayor Ed Lee whose support for Mid-Market revitalization has been crucial to its success, described the groundbreaking as “a moment of great transformation.” He stated that “technology cannot live without the arts,” and said that tech has been attracted to Mid-Market because of its cultural activities. Lee joined other speakers in highlighting the new theater’s role in “bringing vibrant nightlife back to this part of San Francisco. State Senator Mark Leno (who has an honorary arts degree from ACT) and District 6 Supervisor Jane Kim also touted the project, which brings Mid-Market closer to becoming a long-hoped for center for arts and entertainment.

Of the many announcements of new businesses coming to Mid-Market, none has meant more than ACT’s plans to open a state of the art performance space at the Strand Theater in the spring 2015. But at yesterday’s groundbreaking I realized that ACT is bringing something to MId-Market equally important as arts space: the incredible energy and enthusiasm of Carey Perloff, its artistic director, and a network of arts and business connections that will help improve the surrounding area.

ACT’s theater is located at a long troubled block across from UN Plaza. Its costume shop is on this block, and it was ACT’s connection to this part of its operations that inspired its decision to acquire and transform the historic Strand.

This was the first Mid-Market opening I’ve attended where anyone has spoken with as much zest and enthusiasm as Mayor Lee. Not that the Mayor was not his usual enthusiastic self; he was excited enough by the occasion to describe his own college theatrical experience performing in Butterflies Are Free (which led him to go to law school rather than to a career in the arts).

But Lee’s energy was matched by ACT Artistic Director Carey Perloff. Perloff was like a force of nature describing how the Strand project “expands the reach of the ACT story” and will be a “hub for community dialogue.” Perloff sees ACT as providing space for community arts partners and bringing “transformative energy” to the surrounding area.

I asked Perloff if she had any concerns about attracting evening patrons so close to troubled UN Plaza , and she said that she grew up in the East Village (in the pre-gentrification days) and loved the urban texture of Market Street. She reemphasized a point many of us have made for years about Market Street and the Tenderloin: bringing in positive nighttime activities creates the foot traffic, energy and excitement that enhances public safety and helps transforms the neighborhood.

ACT reported at the event that they are only $5.5 million short of the project’s $32 million budget. After hearing Perloff’s pitch for the project, it’s a wonder any potential donor turns her down.

Perloff’s enthusiasm and can-do spirit will be needed to help transform UN Plaza—directly across the street from ACT’s future home— into an open space asset rather than a liability. As I have regularly argued, the surrounding neighborhoods and the city all suffer when this valuable open space discourages rather than attracts people to the area (since it is the site of BART and MUNI stops, UN Plaza is what many people first see when they come to patronize nearby cultural facilities).

UN Plaza has suffered from a lack of influential stakeholders in the area. With ACT joining the Kor group (which is investing millions of dollars into the Renoir Hotel at 7th and Market) and the federal government’s own efforts, UN Plaza could finally become a drawing card, greatly increasing positive evening and daytime activity in the surrounding area.

The combination of the ACT-Strand theaters and café creating evening bustle and a revitalized UN Plaza would represent perhaps the greatest transformation of any block in Mid-Market. Perloff boldly declared that “it is happening” in Mid-Market, a statement few could have made only three years ago.

Randy Shaw is Editor of Beyond Chron. He has positive memories of the Strand’s role as a revival theater in the days before DVD’s.