Activists Protest “Monster in the Mission” 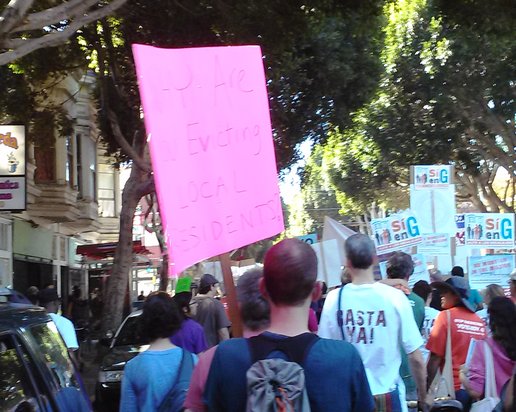 Protesters march against new condos planned for 16th and Mission

Pounding drum beats from youthful musicians sporting “Basta Ya!” t-shirts sounded the alarm that there is an epidemic of evictions and dramatic shortages of affordable housing that has accelerated the exodus of low and middle-income families from this great city.

We have heard the story before and it is being retold in many other places across the country but its repetition in this era of conspicuous consumption does not make it any less compelling.

Remarkably, that does not even rank San Francisco at the top of the list. That dubious distinction belongs to Hong Kong and Vancouver though some would argue New York has bragging rights as well.

But, don’t be too hasty to count out this city for the top spot. With the greatest concentration of wealth anywhere in the nation, housing prices have gotten worse over the last two years.

For example, even the New York Times reporter seemed aghast when reporting this year that a Glen Park middle class neighborhood fixer-upper with linoleum floors and an Eisenhower-era kitchensold for $1.425 million — $530,000 over the asking price — and all in less than two weeks.

The reporter barely concealed his shock that “not a single home on the market is within reach of the average school teacher” and only one house was available for those making $80,000 a year.

And this, with 23% of residents living below the poverty line.

Invest for Success – Evict and Build

Clearly, Walls Street investors have targeted housing as a major profit source with Silicon Valley and other global entrepreneurs ready to pay just about any price, and often with cash at the ready.

Here’s how it works.

Investors buy an apartment unit and evict all tenants under the outdated state Ellis Act which arguably allows evictions if the owner changes use of the building.

This “change of use” is easily accomplished by converting affordable rental units, subject to the city’s somewhat stringent “rent control” law, into condominiums where “rent control” does not apply.

Another way to legally evict tenants is to convert multi-unit buildings into single-family mansions. This is not far-fetched at all. Mark Zuckerberg and Larry Ellison are not the only ones to acquire outlandishly plush city digs that combined several properties.

And, like our two uber-rich billionaires, many of these high-rollers displacing local resident housing do not even live here.

Two local investigative reporters reviewed city records for 5,212 condos in 23 buildings and found absentee owners control approximately 2,034 of these condos – about 39 percent of the total were, therefore, using the plush units more like casual vacation or convenient stopover lodging.

In some buildings, the number of absentee owners was above 60 percent.

But, investors don’t stop there.

They also aggressively fund numerous new development projects of luxury apartments and condos which, of course, further redirects space and funding away from affordable housing for folks who actually live here.

“Let’s look at the 37 cranes that currently dot the landscape of the city. Are they building affordable housing? No!” veteran Mission neighborhood leader Roberto Hernandez categorically told me.

“They are building luxury condos while not one dime has been spent on affordable housing in the last 13 years in the Mission where I live,” the “Our Mission, No Eviction” activist asserted.

The Mission is a legendary working class neighborhood that mingles Latin culture, immigrants, artists, students and youth. It has always been a gateway for new arrivals. Lots of sun, magnificent public murals, great food, broad diversity and affordable rents are big draws.

Now, residents are asking, how long will it last?

Everything is getting worse for local residents who hoped this city would be hospitable for their children to make home.

The seemingly unlimited excessiveness of the ultra-rich seems to have neither limits nor shame. But the consequences of their lifestyle appear everywhere.

For example, there has been a 36% decline of Black residents between the 1990 and 2010 census. The city’s vibrant Latino population faces the same dim prospect.

Almost 50% of last year’s evictions were Black and Latino residents according to the Eviction Defense Collaborative (EDC), a non-profit providing legal aid to renters. This obviously has a devastating impact on the city’s diversity, once a celebrated part of this multi-cultural city.

“Our city is changing fast and not for the better. Mayor Lee should declare a housing emergency,” Hernandez proposed.

Evictions are truly a huge problem.

It’s also worth noting comments by the Mapping Project that “when a landlord alleges breach of the lease or nuisance, it does not necessarily mean a tenant did something wrong.”

Examples cited by the EDC in 2013 include tenants “sued for parking outside the parking lines and cooking late at night.” Along these same lines, the most common reason cited for breach of lease and/or nuisance was related to a dog or pet with the number of these cases four times greater than in 2009.

Of course, landlords hoped tenants would not show up in court, which often occurs because the record also shows thatdisplacement of long-term renters falls disproportionately on seniors, disabled and the poor.

Housing displacement certainly qualifies as the epidemic of our day, activists insist, referring back to the horrific AIDS epidemic of the 1980s. At that time, the city declared an emergency that won universal praise for coming to grips with the disease and establishing internationally recognized health standards.

By declaring an emergency now, the city would have the power to halt all evictions until housing imbalances can be addressed. 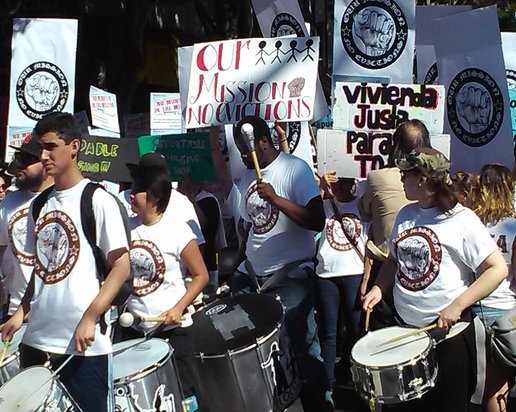 Illegal, Immoral or Both?

Dramatic changes in the economic and social landscape of the city have not gone unnoticed by some city officials, especially when confronted with continuing community pressure. [see photo]

For example, City Attorney Dennis Herrera recently announced charges filed against “two egregious offenders” that “didn’t just flout state and local law to conduct their illegal businesses, they evicted disabled tenants in order to do so.”

“We intend to crack down hard,” he stated, “on unlawful conduct that’s exacerbating—and in many cases profiting from—San Francisco’s alarming lack of affordable housing.”

So far, however, there has been no policy changes.

As a result, as respected community newspaper, El Tecolote noted, an activist coalition of 50 organizations that marched through the streets on Oct. 4 seeks to encourage the mayor and other city officials to come to the aid of working class San Franciscans before it’s too late.

Carl Finamore is delegate to the San Francisco Labor Council, AFL-CIO. He lives in San Francisco’s Hunters Point neighborhood which has the highest foreclosure rate in the city. He can be reached at local1781@yahoo.com