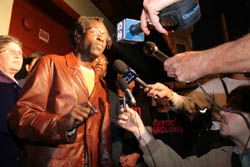 Club owner Les Natali, under fire for alleged racial discrimination at the Castro’s SF Badlands club, has closed the Pendulum, Castro’s only African-American gay bar, to the outrage of patrons, staff and community activists.

“There’s now no place in the city of San Francisco that gay African-Americans can call their own,” lamented Paul Mooney of And Castro for All (AC4A), a project of the LGBT Center. On Thursday, AC4A called a press conference in front of Pendulum, followed by a picket in front of SF Badlands, to protest the closure and demand government follow-up on the charges levied against Natali.

According to representatives from And Castro for All, Natali announced to Pendulum staff Wednesday night that the bar would be closed several months for renovations, and subsequently laid off all staff. Whether employees will receive unemployment benefits is uncertain, as is the possibility of reclaiming their jobs when Pendulum re-opens. Many protestors questioned the timing of Natali’s renovation, given that Natali announced last week that he was selling the bar to a new owner.

“It’s like a landlord selling a building and saying, now I’m going to evict all the tenants because I’m renovating the building,” mused Tommi Avicolli Mecca, a longtime radical queer activist. “Something doesn’t seem right.”

Others doubted whether renovation necessitated closing the bar. “There’s no reason for him to close that bar for renovations,” argued Calvin Gipson, former president of San Francisco’s annual Pride celebration. “Other bars in the Castro have remained open during renovations – the Mix, for example.” At the very least, contends Gipsnon, “there’s absolutely no logical reason for him to close that bar without meeting with his black patrons.”

There is little love lost between activists and Natali, who has been the target of several investigations for racist practices in admission and hiring. Last year, complainants brought their case against SF Badlands to the San Francisco Human Rights Commission, which conducted a ten-month investigation and found in favor of many of their claims, including selective application of dress codes and an illegal door policy requiring multiple IDs. Marvin Miller, one of the original claimants against SF Badlands, recounts being asked for three pieces of ID upon re-entering the club, to which he’d already been admitted.

“None of us are truly surprised by what Les Natali did with the Pendulum,” Miller remarked. “He’s been engaging in racist practices for many, many years.”

However, last Friday, the California Department of Alcoholic Beverage Control (ABC) decided, on the basis of insufficient evidence, not to file accusations against Natali. Instead, the department imposed three conditions upon Natali’s Pendulum license: compliance with civil rights law, anti-discrimination training for employees, and public signage indicating that the bar does not discriminate. The ABC’s decision, widely reported as having “cleared” Natali of charges, was a disappointment to many who attended Thursday’s protest: a news article headlined “State board finds no discrimination by Castro bar” was displayed prominently on the front windows of SF Badlands behind the protestors’ picket line.

“Les Natali has not been found innocent,” scoffed Gipson. “The ABC must question the way he practices, because they placed conditions on his license for the Pendulum bar. He’s guilty, and he knows he’s guilty. It’d be nice if he was upfront about it, but he’s not – because he’s a racist.”

“The important thing is to actually read the one-page finding,” added Mecca. “They’re not saying that he was totally innocent. What they said is that they don’t have enough evidence to revoke his license.”

The closure is disheartening to many African-American gays, lesbians and other queer-identified people who attended Thursday’s protest.

“The Pendulum was the only real place for people of African descent to gather,” reflected George Smith, co-chair of LGADDA (Lesbians and Gays of African Descent for Democratic Action). “It was our spot.” Losing it, he says, “was like being raped in front of the whole city and no one coming to help.”

Duane Cramer, vice-president of Frameline, a Bay Area organization that promotes queer media arts, agrees. “It seems as though black people are being pushed out of the city,” he lamented. Pendulum was “the one safe and welcoming space for all people, Black, white, Latino, women, transgender people . . . it was more diverse than any other bar in the Castro area.”

Racism within the Castro is nothing new, many report. “In the Castro, which is supposed to be the mecca of the gay community, there’s no place for Black people,” stated Swazzi Sowo, a former board member of San Francisco Pride. “The racism is so prevalent in the white gay community. In one particular store, a manager I know doesn’t work there anymore, because people would come in and say, ‘Look, there’s a n***** working there.” Sowo said that on three different occasions, she has been called racial epithets on the street. “It’s like the ’50s in Mississippi.”

“It’s not really news to African-American people that go up there,” said Smith. “We just finally got some attention to it. When they were pushing gay marriage, they were pushing it as a civil rights issue – but now that there’s a civil rights issue on the table, they don’t want to talk about it.” He doesn’t expect much from the Castro anymore. “People will have to head to Oakland, because there’s not much left here for African-American people,” he remarked.

Others speakers emphasized the blow to Pendulum employees. Robert Haaland, a representative of SEIU Local 790, recalled Natali’s claim before city officials that closing SF Badlands on charges of race discrimination would place an unfair burden on bar employees. “I sat there and listened for forty-five minutes about how much they cared about their employees,” said Haaland. Comparing such statements with the abrupt closure of Pendulum, he exclaimed, “How scandalous!” Haaland called for unionization of city bars, and for the immediate re-opening and rehiring of the Pendulum employees. In a similar vein, Tom Lynch of the LGBT Community Center offered job replacement services to the Pendulum employees, with preferential placement in the Castro.

John Newsome, a leading organizer from And Castro for All, said that the protestors seek dialogue with the Pendulum’s new owner, as well as more serious penalties for Natali.

“We will not accept this,” he stated tersely.

However, as he scanned the gathering crowd on Thursday night, he was pleased.

“If you look around,” he said, “this looks a hell of a lot more like our community than Badlands ever did.”