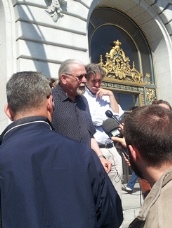 The fight for short-term rental regulation heated up on April 26 as large rallies both in support and against Supervisor Chiu’s legislation on the subject were held in front of City Hall.

Leah Pimentel at afternoon rally in support of Chiu proposal

At stake is the future of short-term rental service companies like Airbnb and Homeaway, which have been criticized for evading hotel taxes, circumventing commercial zoning laws, and causing the illegal Ellis Act evictions of buildings that have been converted to short-term rental hotels through such services.

Supervisor Chiu’s proposed legislation seeks to regulate this industry by forcing Airbnb and other companies to collect and remit the 14% hotel tax, create a registry for those doing short-term rentals, and limit such rentals to 90 days a year, with tenants required to live in their space for 275 days of the year. The bill was written with support form the Tenants Union and Airbnb.

However, a new coalition has emerged in opposition to the bill, which took close to 2 years of meetings to create. They are gearing up a ballot initiative campaign that seeks to create much harsher regulations for short-term rentals than Chiu’s legislation.

A crowd of around 50 people gathered on the steps of City Hall in the morning to join the coalition in opposing Supervisor Chiu’s legislation, which they decried as weak and unnecessary given the existence of regulatory laws already in place.

“We are asking that the city of San Francisco enforce its current laws fairly and equitably before creating new laws in an already confusing and over regulated housing market.”

Mike Casey, president of the hotel workers union UNITE Local 2 said, “It’s also about jobs. We struggle day in and day out to make sure that these hotel corporations, which is largely the real estate industry today, make sure workers get paid a decent wage and get paid the full benefits they deserve for doing their job.”

“The hotel industry is a successful industry in this city. Airbnb is compromising that. Airbnb is getting in the way of good hotel worker jobs.”

The legislation “changes the definition of residents and residential units in every below market rate, every affordable housing unit, every SRO, and in every in-law unit, to include… hotel use as being the same as a residential use,” he said. “It undermines of years of struggle and advocacy to protect the conversion of SRO from hotels, create affordable housing opportunities for low-income people, and to require developers to subsidize permanently affordable, below market rate units.”

Former Supervisor Aaron Peskin said that it was necessary for these companies to begin paying hotel taxes they have been avoiding for so long. “Whether or not it is an legal or illegal use, it is incumbent on these hosting platforms to collect and remit hotel tax, which pays for our arts, which pays for our police, which pays for vital city services that attract residents and tourists,” he said.

A rally organized by Airbnb in support of Supervisor Chiu’s legislation was held just hours later. The rally drew a somewhat larger crowd, with signs supporting the legalization of “home sharing.” The rally focused more on the benefits of home sharing rather than the specifics of Chiu’s law, which would create new regulations on the currently unregulated and illegal industry.

Peter Kwan, organizer of Home Sharers of San Francisco, spoke out against the coalition’s proposed ballot initiative and advocated for legalization. He said the initiative would essentially prevent home sharing altogether.

“While the Home Sharers of San Francisco have reservations about the legislation proposed by Supervisor Chiu, his legislation legalizes home sharing, and helps us as a community move forward,” he said.

“San Francisco should be leading the way in showing how technology can be a force for good and showing the world the benefits of a shared city. This proposed initiative does the opposite.”

Leah Pimentel, a mother and Airbnb host, spoke about how Airbnb is necessary for helping working people afford to live in the City. Airbnb is “helping working class families,” she said. “Without Airbnb, there will be numerous families that will have to leave San Francisco because they will not have the option.”

“I am here today in support of the work of Airbnb and their work that keeps families in San Francisco.”

While Chiu’s legislation would legalize short-term rentals, additional tenant protections would be put in place as well.

Ted Gullicksen of the SF Tenants Union told Beyond Chron that Chiu’s legislation would protect tenants from being evicted on the grounds of illegally subletting their apartments. Gullicksen joined Chiu at the press conference announcing the legislation, a fact overlooked by critics claiming that tenant input was not included in the proposal

For all the fury, any action to address short-term rentals remains months away. Public hearings on Chiu’s legislation won’t occur until the summer, and the coalition will need much more funding if it hopes to put the initiative on November’s ballot.