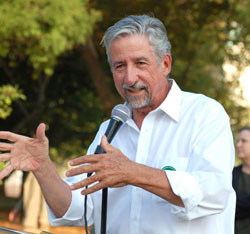 Tom Hayden, who died Sunday at 76, was one of a kind. He was the only prominent 1960’s radical to become an influential politician, doing so without ever compromising his progressive principles. Hayden also stood out as among the deepest political strategists of his time, a fact reflected in his recognition as far back as the 1970’s that of the three largest states in presidential elections, California would be the easiest for him to help turn blue.

Tom Hayden had three distinct lives: movement activist and theoretician, elected official and political organizer, and author. He was not perfect in any of these realms, but from 1962 to his death Hayden offered a brilliant and perceptive analyses of national, state and local politics.

Tom Hayden came to national prominence as the chief author of the historic Port Huron Statement, the 1962 manifesto of the Students for a Democratic Society. It remains among the most brilliant and visionary statements for a more equitable American future. If you have never read it, perhaps Hayden’s death will motivate you.

Hayden’s 1960’s days have been well chronicled and I won’t repeat the stories here. Hayden’s unresolved conflicts with his father left him a very prickly person in those days, and stories of his conflicts with those with whom he shared group households were legion (he would reconcile with his father later in life). Hayden’s participation in the Chicago 7 trial following the 1968 Democratic Convention solidified his reputation as a “1960’s radical”—but unlike others in those days, this was not his public high point and he had a much larger life to live.

As the 1960’s movements gave way to the 1970’s, Hayden had the brilliant idea of launching a statewide progressive organization in California. In a speech I heard him give in Berkeley in the mid-70’s he explained that changing America required turning one of the three biggest states—Florida, Texas and California—into a Democratic state. He correctly saw California as the best prospect. Through funding from Hayden’s then wife, movie star and anti-war activist Jane Fonda, the Campaign for Economic Democracy (CED) was born.

CED helped put solar power, anti-nuclear power and rent control on the state and local map. I use the word “help” guardedly as Hayden’s statewide organization often ran into conflicts with local groups working on these issues. These groups resented the “outsiders” at CED “telling them what to do” and “thinking they know better than we do about our issues.” Whenever I hear activists idealize about creating “one big multi-issue progressive organization,” I recall the reality of the local response to CED.

In 1976, Hayden jumped into the political world not by running for City Council or state Assembly but by challenging incumbent Democratic Senator John Tunney in the 1976 primary. This seems like a politically foolish and very un-Hayden like move from a later perspective, but at the time radicals like Hayden saw liberals like Tunney not just as part of the problem, but the source. Hayden backers didn’t want a Democratic Senator who took money from Big Oil like Tunney did, and saw the first term Democratic as vulnerable to a primary challenge.

I was totally excited by Hayden’s 1976 campaign and it was my first experience doing election afternoon Get out the Vote. It was an eye opener.

GOTV volunteers were dispatched to East Oakland, apparently ripe territory for Hayden voters. But hardly anyone I spoke with had even heard of Tom Hayden. Nor were most of those I contacted planning to vote.

It was a depressing experience made worse by the fact that by the time I got back home that evening the polls had closed and networks had already projected Tunney the winner. Hayden miscalculated in challenging Tunney. Even worse, his attacks so weakened Tunney that he would lose his seat that fall to the right-wing S.I. Hawakawa, who gained fame by cracking down on protestors at San Francisco State.

Hayden was developing a close relationship with California Governor Jerry Brown, which got closer over time. Brown took a political risk by associating with the “radical” Hayden, but it contributed to Brown’s strong support from the left when he ran for President in 1976 and 1980.

Hayden would eventually get elected to the State Assembly from Santa Monica, where he served from 1982-1992. My Republican parents lived in his district. Hayden combined pursuing big picture issues with recognizing that he had to take care of district concerns; I will never forget my parents raving about how the great Tom Hayden stood up for their interests in a dispute over their beach club. That Tom Hayden could win the loyalty of my conservative parents was a tribute to his political skills.

Hayden would go on to serve in the State Senate from 1992-2000, when his career ended due to term limits. In 1997, he made an ill-conceived late run against incumbent Los Angeles Mayor Richard Riordan which taught progressive activists another important lesson: don’t assume progressive support for a race that progressive constituencies and leaders don’t believe you can win.

Some on the left were incredulous that major Los Angeles unions were backing the Republican multi-millionaire Riordan over Hayden. But Hayden never laid the progressive groundwork for his campaign, and labor did not want to risk alienating the sure winner Riordan by backing Hayden’s poorly conceived campaign.

Tom Hayden was a brilliant strategist, but like most with long careers in the arena he made mistakes.

I asked Hayden when I saw him backstage at the Los Angeles Times Book Festival in 2009 how he found the time to write so many books. He paused, and said, “it’s not as easy as it looks.”

In The Activist’s Handbook I discuss Hayden’s strategically savvy view of politicians: “We’re with you when you are with us, and against you when you are not.”  Tom Hayden’s shift from radical outsider to politician never changed his understanding of how social change occurs, and his long legacy of insider and outsider activism will not be forgotten.

Tom Hayden personified what Theodore Roosevelt described in 1910 in his legendary Man in the Arena speech:

It is not the critic who counts; not the man who points out how the strong man stumbles, or where the doer of deeds could have done them better. The credit belongs to the man who is actually in the arena, whose face is marred by dust and sweat and blood; who strives valiantly; who errs, who comes short again and again, because there is no effort without error and shortcoming; but who does actually strive to do the deeds; who knows great enthusiasms, the great devotions; who spends himself in a worthy cause; who at the best knows in the end the triumph of high achievement, and who at the worst, if he fails, at least fails while daring greatly, so that his place shall never be with those cold and timid souls who neither know victory nor defeat.

Unlike most social critics and political commentators, Tom Hayden was always in the arena. And if that led him to draw opposition and often harsh attacks, that’s the price he paid for personal engagement in securing progressive change.