Activism Makes a Lot of Noise 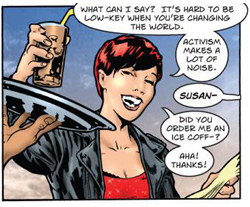 With the online graphic serial “La Muse,” writer Adi Tantimedh and artist Hugo Petrus have brought to superhero tales Che Guevara and Emma Goldman combined with modern coolness. Leftist political activist Susan La Muse gains worldwide notoriety when she thwarts a London suicide bombing. But then, emerging unscathed from the explosion with the living suicide bomber and flying away unaided will grab attention…especially after video footage gets posted on the Internet.

Hollywood talent agent Libby La Muse unwillingly gets her notorious sister to sign with her agency. But the agent soon regrets representing Susan. The super-powered activist is rightfully perceived as a threat out to overturn the current social order rather than serve it faithfully. She becomes the target of violent religious fanatics and paranoid governments among others. The very big secret Libby shares with her sister also doesn’t help the agent’s stress levels.

Tantimedh and Petrus’ graphic serial uses leftist politics to ridicule the moderate/right-wing bent of typical superhero comics. Underlying the “heroic deeds” of the Supermen and Batmen of the world is preservation of the sociopolitical status quo. Muggers and mad scientists regularly get put down. But the Enrons and the Exxon/Mobils of the world are free to ruin people’s lives and the environment as long as they don’t seriously step out of line.

Does “La Muse”’s fantasy elements trivialize its mentions of corporate protests and religious homophobia? No. Tantimedh and Petrus generally keep Susan’s use of invulnerability separate from her political boycotts and public speaking. Her main opponents are not mad scientists, but a neo-conservative cabal that fears her possibly crippling the arms industry and bankrupting Haliburton. Still, having superpowers helps with big jobs such as repairing the ozone layer hole and healing an injured assassin.

Susan’s sister Libby serves as “La Muse”’s comic relief. Her protests about Susan moving too fast to change the world will sound familiar to activists who’ve encountered political moderates. Libby’s stick-in-the-mud attitude tempts her activist sister to find new ways to push the agent’s buttons. Teleporting a pajama-clad Libby to the North Pole is just one of Susan’s tricks.

In Tantimedh’s hands, Susan’s exploitation of celebrity worship becomes plausible. A celebrity’s public cough will spur a dozen print and airwave speculations regarding its cause. Celebrity worship to Susan is “like an E-ticket to kicking it up a notch.” Through her heightened media attention, she publicly offers views normally shut out of mainstream media. She confesses to not believing in a supreme deity, especially one that actively hates LGBTs.

The lack of popular backlash towards Susan’s “controversial” pronouncements may seem unrealistic. The Dixie Chicks’ career took a serious tumble after Natalie Maines’ public statement about being ashamed of George W. Bush. Are Tantimedh and Petrus implying that leftish celebrities muzzle their willingness to make political pronouncements so their privileges of celebrity are protected?

Does Susan’s decision to exploit her celebrity for political ends represent a sell-out of her leftist credibility? If one thinks of selling out as trading personal credibility for personal gain, then the answer would be a firm no. Susan’s personal wealth has not been enhanced by the accurate hedge fund advice she has given.

Despite these positive attributes, Tantimedh and Petrus’ political superwoman will not please all readers. Susan unapologetically smokes in public. Facing down prospective assassins occasionally forces her to resort to violent tactics such as killing a pair of religious zealots who launch a missile into a crowded outdoor restaurant.

(“La Muse” is currently serialized online at www.bigheadpress.com/lamuse. New readers can get up to speed by clicking the “Story Start” link and reading from the beginning. The newest 2-3 page installments appear every Monday. Copyright 2007 by Adi Tantimedh & Hugo Petrus)