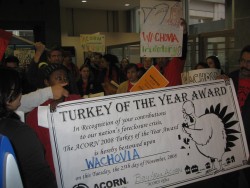 Two months ago, San Francisco ACORN held a sit-in at Wachovia Bank – after the Bay Area’s 4th largest bank repeatedly refused to work with families who had been given predatory loans they could not afford. After that action, the Bank agreed to their demands – but (so far) not in writing. Sensing an impasse, the group took over the same Wachovia branch yesterday – asking the bank (which is scheduled to merge with Wells Fargo in January) not to be a “turkey” to homeowners. Again, ACORN demanded the branch manager fax a letter to the bank CEO – urging Wachovia to take a streamlined approach on “workouts,” and heed President-elect Barack Obama’s call for a moratorium on foreclosures. Back in September, the branch manager had refused to fax their letter – instead calling the police, and resulting in a two-hour sit-in at the bank. This time, the manager accepted ACORN’s “award” – and faxed their letter in a relatively short period of time. The group then marched out, chanting “we’ll be back!” if the Bank continues to stonewall their concerns.