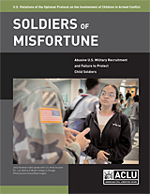 The American Civil Liberties Union (ACLU) released a major report last week stating that the Junior Reserve Officer Training Corps (JROTC) violates a protocol of the United Nations-sponsored Convention on the Rights of the Child, by targeting students as young as 14 for recruitment to the military.

The international protocol analyzed by the ACLU report outlaws the recruitment of child soldiers. The U.S. Senate ratified this protocol in 2002, making it the law of the land, and agreed not to recruit soldiers under the age of 17. However, as usual, the U.S. military sees itself as above the law.

As any dunderhead can see, JROTC — a prime recruitment tool of the military — includes high school students well under the age of 17, including many freshmen and sophomores.

The release of the new ACLU report on May 13, titled “Soldiers of Misfortune,” only adds fuel to the fire of the anti-JROTC movement.

The ACLU report also takes aim at one of the spurious claims of the pro-JROTC forces — that JROTC is “voluntary.” It is worth quoting the ACLU report at length on this:

“Students are involuntarily placed in the JROTC program in some public schools. For example, teachers and students in Los Angeles, California reported that ‘high school administrators were enrolling reluctant students in JROTC as an alternative to overcrowded gym classes.’ Involuntary placement of Los Angeles students has been a continuing problem, with involuntary enrollment surging before the fall deadline that requires enrollment levels of 100 students to keep the program running (federal law requires JROTC programs to have a minimum of 100 students or 10% of the student body, whichever is less, in order to maintain a unit).”

According to a recent survey of over 800 San Francisco JROTC students, 15.6% of the cadets who responded claimed that they were “placed in the program without my consent.” Reports of SF students being placed involuntarily in JROTC go back to at least 1995, during a previous attempt by members of the school board to abolish JROTC.

In Buffalo, New York, according to the New York Civil Liberties Union, the entire incoming freshmen class at Hutchinson Central Technical High School was involuntarily enrolled in JROTC in 2005.

The Pentagon has a long and deadly reach. It is criminal that they continue to send our young men and women to foreign lands like Iraq to fight and die in illegal and immoral wars. It is intolerable that the San Francisco school board continues to aid and abet the Pentagon — allowing them to flaunt international law with impunity by recruiting our 14, 15 and 16 year old sons and daughters for their war-mongering.