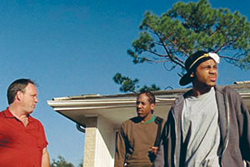 JANUARY 17—After two years, I am back in Park City for the 2008 Sundance Film Festival. Since Opening Night tickets are far outside my Sun Chips budget, my actual festival going does not begin until tomorrow. My task is to catch as many politically themed films as I can at the festival. Would this year’s crop of films yield a “No End In Sight”?

JANUARY 18—The first day of my Sundance festival going also happens to be the third Friday of January. Wearing a black “U.S. Out Of Iraq” ribbon on my coat while walking the photographer and TV camera-heavy streets of Park City offered the possibility of a little free media exposure for a progressive cause. Unfortunately, basic fashion sense trumped political earnestness. A black ribbon visually disappears into a coat made of dark brown cloth.

John Magary “The Second Line” is set among the FEMA trailers and water-damaged homes that stand as silent witnesses to Hurricane Katrina’s devastation. The film focuses on the difficulties in remaining moral in a world where bending the rules provide a better chance for rebuilding one’s future. Macarthur (Al Thompson) finds his morality tested to its limits thanks to a really bad day that starts with the theft of his life savings. The film’s lead character may be a generally decent man. But he’s not above trying to steal his girlfriend’s car to get to a possible job.

“The Second Line”’s slice of life tone makes its morality tale compelling instead of eye-rolling. Long moral speeches are eschewed. Instead, it is the barely suppressed anger seen in Macarthur’s half-masked face that speaks volumes about the character’s frustrations with his unjust existence. I rightfully feared that Macarthur could not quietly live with his frustrations forever.

Magary’s realistic visual style indicts Bush Administration incompetence and negligence through such images as the tract house-like rows of FEMA trailers. One may yearn for more anti-Bush polemics. But seeing the still-devastated houses and trashed streets more than a year after Katrina’s rampage eloquently shows the sluggishness of the Bush Administration’s response to one of the worst natural disasters on our country’s soil. Promoting Darwinian ruthlessness is not a good policy for rebuilding devastated lives.

Jules Nurrish’s “Bend It” limits its politics to that of gender dynamics. Does it matter what’s the sexual orientation of the short’s two dancers? I am content to revel in the short’s democracy of desire. Each dancer with their taped female chest and male pants and shoes has the opportunity to alternate between submission and dominance. The sexual energy of their dance makes the traditional sexual roles seem duller than ever.

JANUARY 19—The aftermath of the “Derek” screening leaves me with a horrible sense of intellectual and emotional impotence. Isaac Julien and Tilda Swinton’s tribute to their long-deceased mutual friend is an obvious labor of love and respect. Yet how can I share their admiration when images from Jarman’s films escape my ability to form words to describe the power I intuitively sense in them? That feeling of intellectual embarrassment is not helped by my onset of brain and tongue paralysis during the Q&A period. But then, having Julien and Swinton stand less than 6 feet away from me encourages foolish behavior avoidance.

Did “Derek”’s familiar organizing principle of chronologically tracing Jarman’s life and filmography do a disservice to the spirit of Jarman’s avant garde oeuvre? I don’t think so. Part of “Derek”’s aim is to encourage re-discovery of Jarman’s innovative film work. One needs to comfort a potential viewer with an image of lushly beautiful sex in the pounding surf before hitting him or her with the sight of a very large gold plated penis.

The documentary also introduced viewers to Jarman the man. Interview footage captures his disarmingly lively yet politically aware persona. But the late filmmaker’s impact can also be seen in the footage of Swinton’s lioness walk through London’s streets. In those canyons of glass and steel, the actress like her deceased friend appears unintimidated by the supposedly mightier social forces she moves among.

By contrast, my Saturday evening’s wandering along Park City’s Main Street emphasizes my miniscule nature. My lack of secret passwords or special contacts denies me access to any of the film-related parties going on that night. Yet my desire to be more than a wanderer does not translate to joining the crowd of celebrity gawkers standing outside an exclusive nightclub.

Even in my wanderings in the cold weekend night, political content can be found. The poster for Morgan Spurlock’s new film “Where In The World Is Osama?” stands out on a kiosk whose every square inch is covered with enticements for other Sundance films. I think of the poster for “Raiders Of The Lost Ark,” with the “Super Size Me” director depicted in the Indiana Jones role and wielding a large net instead of a bullwhip.

For filmmakers who lack Miramax-sized budgets, other means must be employed to advertise their films. A guy who’s flogging a film not showing in either Sundance or the Slamdance Film Festival resorts to push cart delivery through the winter streets. Slightly higher on the advertising technology level is the Veggie Van. The vehicle is a mobile advertisement for the Sundance documentary “Fields Of Fuel” as well as a mobile testament to the practicality of biodiesel fuel.

I sheepishly admit I passed by the Veggie Van without stopping on my first walk up Main Street. But nostalgia for the eco-aware Bay Area leads me to converse with a man flogging the film. Our talk is a mix of shared interest and some gentle persuasion to convince me to check out the Josh Tickell-directed documentary. At the end of the conversation, I at least commit to wearing the film’s promotional button. Its motto reads “Make Fuel Not War.”

JANUARY 20—Racial and sexual politics play minor but noticeable roles in the excellent “Frozen River.” White privilege still matters when one commits crimes. The Mohawk way of resolving conflict, though, provides unintended amusement for some of the non-Native American audience members.