“A Place at the Table” – New Film Examines Hunger in U.S. 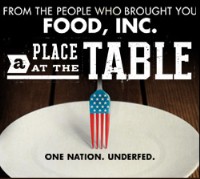 In the shadow of sequestration, which will cut federal programs, the new documentary A Place at the Table is more timely than ever. The film takes a look at hunger in the U.S. through the stories of three people and their families. Barbie, a single mother of two kids in Philadelphia who is trying to improver her life; Rosie, a fifth-grader in rural Colorado who depends on food banks and faith-based community services to get by; and Tremonica, a Mississippi second-grader whose health issues are aggravated by empty calories.

Well-meaning federal policy of the Great Depression years means that farmers grow corn and other products that result in junk food and high-fructose corn syrup — a nefarious additive to many junk foods. Wholesome foods such as vegetables and fruits don’t make the cut. Combine this with recent cutbacks in other family assistance programs, and you have a recipe for disaster. Local faith-based community groups are expected to pick up the slack, but are woefully short of the task at hand.

A Place at the Table tells the stories of local people and families caught up in the crossfire between public programs, politicians, and federal and state policy which seems willfully blind to the suffering of millions. A sequence showing how conservatives block a modest increase in food stamp benefits is particularly painful to watch. The result is that 50 million people in the U.S.— and one in four children—don’t know where their next meal is coming from, despite the nation having the means to provide affordable food for all Americans.

When unemployed people like Barbie finally find a job, they find they are making just a bit more than welfare, and lose all or part of their benefits — depending where they live, and the welfare qualification rules of cities and states — and are back to square one, despite trying to better their lives.

The film’s original music is by Grammy and Academy Award winner T Bone Burnett and the popular duo The Civil Wars, who recorded two songs for the film’s soundtrack.

Guest Appearence at Embarcadero Center Cinema in San Francisco: the 7:15pm show on Saturday, March 2 will feature Q&A with Ken Cook, interview subject in the film, and president and co-founder of Environmental Working Group.