A Church that Celebrates Orgasms 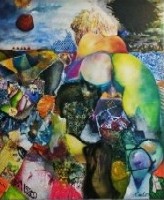 How’s this for the origin of a new religion? Painter Carlos Bebeacua does a work called The Madonna of Orgasm, which is censured at the 1992 Expo in Sevilla, Spain because it is considered pornographic. During a protest of the censuring, Bebeacua and his supporters are arrested by the Spanish policia. Four years later, the experience inspires him to do what many have done quite lucratively: Start a new religion.

Next thing you know, Bebeacua, a native of Uruguay, is the self-appointed cardinal of the Madonna of Orgasm Church. His application to register the church name in Sweden, where he has lived for many years, was rejected at first (because it might be offensive to Christians), but an administrative court recently ruled that the new religion has a right to be recognized. That’s one small step for the Madonna of Orgasm, one giant leap for fun religions that we’d all like to join. What’s not to like about a religion that celebrates the human orgasm?

The church’s belief system is pretty basic. According to Bebeacua, as quoted in The Local: Sweden’s News in English: “The orgasm is God, the orgasm should be worshiped.” Praise the Lord, and pass the condom.

“The orgasm is the ultimate feeling of lust, it shouldn’t be limited to ejaculation. You can reach it through art or by looking at a landscape and thinking ‘Wow!’” Art or a landsdape?

It gets even stranger. The church only has priestesses (as in priests of the female variety) who preach from the Catechism of Orgasm (where can I get a copy?) and drink fruit juice. There’s no sex during services. Bebecua isn’t ruling out that it might happen, though he admits, “I don’t know how we’d react if it (did).” It’s called voyeurism.

Bebeacua says he has hundreds of members right now, but hopes that the gospel of orgasm will spread once the church is registered.

Considering the sex-negativity of most mainstream western religions, Madonna of Orgasm is certainly a welcome relief. Perhaps to further its aims, the church can do missionary work, like the Mormons or Jehova’s Witnesses, and send devotees to preach the gospel door to door.

For the stubborn nonbelievers there could even be demonstrations of how to achieve the big O, as Lou Paget calls it in the book of the same name. Talk about spreading joy to the world. Then it might well be nicknamed the Church of the Ejaculate Conception, as Pinko Magazine suggested.

When it comes right down to it, Bebeacua’s religion is no more ridiculous than believing in sacred underwear, baptizing and marrying the dead, Thetans trapped in meat bodies, or eating the body and drinking the blood of a dead savior.