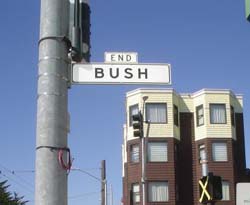 A group of San Franciscans are collecting signatures for a November Proposition to rename a local Sewage Treatment Plant after George W. Bush – which, if passed by the voters, would take effect on January 20, 2009. Complete with an impressive website, the “Presidential Memorial Commission” believes this is the most appropriate way for San Francisco to remember George Bush’s legacy. But as much as I hate our sorry excuse for a President, I strongly oppose this idea — because it is terribly unfair to sewage treatment plants. Instead, like I proposed a year ago, San Francisco should change the name of Bush Street. And to sweeten the deal, we should change it to Obama Street – and have it go into effect on January 20, 2009.

The folks behind renaming the Oceanside Sewage Treatment Plant are good progressives, and their idea (albeit tounge-in-cheek) is not without merit. George Bush is the worst President in our country’s history, but after he leaves office right-wing conservatives will try to rewrite his legacy. As Randy Shaw observed upon Gerald Ford’s death in 2007, how do we know that Bush won’t be similarly lionized when he dies? Efforts must begin now to help generations remember how dark and tragic the Bush years truly were – and doing so on the day he leaves office only makes sense.

But naming the Oceanside Sewage Treatment Plant after George W. Bush is terribly unfair to sewage treatment plants. For one thing, sewage treatment plants clean up colossal messes – not the other way round. And for the people who work at the San Francisco Public Utilities Commission (which runs the Oceanside facility), how unfair would it be for them to work with something named after Bush?

“As we near the end of George W. Bush’s presidency,” reads the campaign website, “we think it is important to select a fitting monument to this president’s work. On matters ranging from foreign relations to fiscal and environmental stewardship, no other president in American history has accomplished so much in such a short time.” The trouble with this premise is that it suggests we should name something – even something laughably foul and putrid – after President George W. Bush.

Consider that the Ronald Reagan Legacy Project (led by Grover Norquist) has a goal of naming something after the 40th President in every county in the United States – besides their other goal of putting Reagan’s face on Mount Rushmore. I’ve always joked about what San Francisco could possibly name after Ronald Reagan, and some suggest that we should just pick a random manhole.

But I’ve always replied: why give these right-wing jerks the satisfaction of naming something after Ronald Reagan? Maybe a better tribute to George Bush is to REMOVE his name from another City landmark – just to send the message that we hated the 43rd President so much that it was necessary to erase his legacy after he left office.

Bush Street in San Francisco was not named after our current President (in fact, nobody knows exactly who it was named after) – but there’s no question that George W. Bush has tarnished its reputation. After I wrote a piece for Beyond Chron last year suggesting that we change the street name, some people who live on Bush Street told me it sounded like a good idea.

Rather than change the name of a Sewage Treatment Plant after George Bush on the day that he leaves office, why not on that day remove the name “Bush” from one of the major streets in San Francisco – and replace it with Obama? Barack Obama is likely to be our next President, precisely because his message of “hope” and a more progressive future is the antithesis of the nightmare that our nation has suffered under the current President.

Keep in mind that at several points in the last eight years, local San Francisco activists have vandalized “Bush Street” signs as a means of protesting our current President. As a dual French-American citizen, I find it embarrassing that the French Consulate, the Alliance Francaise and many good French restaurants in downtown San Francisco are all located on Bush Street. We at least owe it to the French to change the street name.

Renaming Bush Street after Barack Obama? Now that would be a fitting tribute.