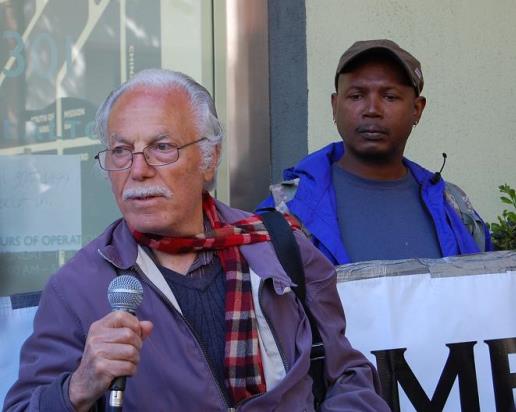 Here is the poet’s powerful letter on De Leo’s behalf:

the effort of North Beach poet Diego De Leo, his neighbors and community

home of more than 30 years by eviction via the Ellis Act.

Diego lives on Chestnut Street, his home for more than 3 decades. He is

describes his relationship with San Francisco as “Love at first sight”.

He married his late wife, Josephine, at Saints Peter and Paul Church and

helped build the community of North Beach, whose values of sharing,

preserving history and respecting elders are falling to the forces of

corner– is using the Ellis Act to evict Diego. This is Coyne’s second

attempt to evict Diego–his first attempt was described as “fatally

Of course, this is about greed. Speculators and landlords abuse the

Ellis Act to evict tenants with the intention of “flipping”

buildings–selling quickly at a profit. Seniors are preyed upon, some

end up homeless; others, such as North Beach tenant Elaine Turner, die

We condemn the eviction of Diego, a senior and treasure of the community

of North Beach. He is a poet whose verses are a portent to what San

eroding. We, as poets, have a responsibility to speak the truth and to

denounce the unbridled greed and impunity with which landlords and

speculators are allowed to operate in our city.

We demand that Martin Coyne drop the Ellis Act eviction against Diego.

whose health is dependent on a stable home. Let Diego continue to

enrich his community with poems and the warmth of his spirit.

Randy Shaw is Editor of Beyond Chron and Director of the Tenderloin Housing Clinic, whose attorney Steven Collier is representing Diego De Leo in his case