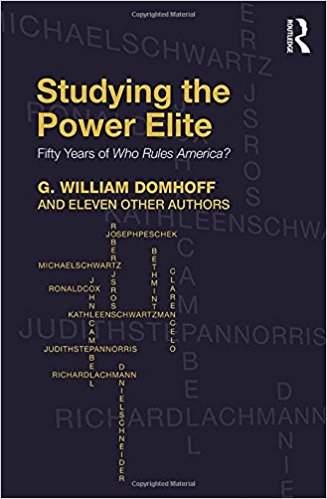 University of Santa Cruz Professor William Domhoff released a book in 1967 that forever changed how scholars looked at power in the United States. Ambitiously titled Who Rules America?, Domhoff’s book arrived like a sociological earthquake shaking the foundations of those arguing that competing interests groups ruled American politics, not anything resembling a class-based  “power elite.”

Today, Domhoff’s perspective on who rules America has clearly become the dominant perspective of those from all political parties. But Bill Domhoff  chose to commemorate the 50th anniversary of his book (which is now in its 7th edition) not by celebrating the durability of his thesis but instead by inviting critics to point out where  he fell short.

That’s what a new book by Domhoff and eleven other authors, Studying the Power Elite: Fifty Years of Who Rules America?, is all about. Domhoff starts with a brilliant essay responding to many of the chief critiques of his book. He then allows other prominent academics to file their own arguments against his analysis.

It takes a scholar secure in their own intellectual heft to engage in such a process. Domhoff is combative when he thinks he is right and open to change when he recognizes he may have been wrong; the reader gets an inside look at his thought process as we follow his diligent efforts to figure out what theory best explains who rules America.

Those who went to college after the Reagan years may have a hard time believing there was once a serious debate over who actually “ruled” America. C. Wright Mills and then William Domhoff were once seen as outliers in arguing that a “power elite” akin to traditional versions of a “ruling class” pretty much got its way in shaping national policies.

The prevailing view, and one my professor espoused when I took Political Science 1A at UC Berkeley in the fall of 1974, was that United States policies were determined by a variety of competing interest groups. This “pluralistic” approach to power argued that sometimes big corporate interests and businesses won in the policy realm, and sometimes they lost. Domhoff’s claim that power is concentrated at the top and that the rich and powerful interests almost always get their way was then seen as almost anti-American; today, this view is widely accepted even among many Trump supporters.

Because Domhoff emphasized the power of class interests in setting American policies, he was frequently charged with being a “Marxist.” He never was. He was a small d “democrat” whose research took him in a direction that showed that while popular resistance brought social change, that the ruling elite almost always get their way on the big issues impacting the nation (it’s worth recalling that ruling elites largely supported the 1960’s Civil Rights Movements and more recently the expansion of LGBT rights).

Younger readers may wonder what all the fighting among political scientists was about. Yet in the 1990’s Harvard’s Theda Skocpol revived a version of pluralism to challenge Domhoff’s findings. His opening essay in this book addresses why he believes she was off base. Skocpol’s followers share her distaste for Domhoff’s theory of power that sees government and corporate interests as closely aligned; yet the vast majority of Democrats and likely most Republicans see power as being exercised precisely that way.

The Future of Who Rules America?

After opening with Domhoff’s essay on his own assessment of how his 1967 thesis has stood the test of time, the remainder of the book has academics raising their own challenges to the original book. Most of the pieces are very academic, as befits a work that has been subject to theoretical debate since its publication.

If you have never read the original Who Rules America? it is still worth reading. I read the book in college and was a true believer in his analysis. When you look at all of the sociology of that 1960’s era, few books proved more transformative and ultimately more correct than Domhoff’s 1967 edition.

Those familiar with the original will get a kick out of this new volume. I am hard pressed to think of another book which has the author so vigorously defending himself from his critics. And when all is said and done, even the strongest critics in the new book recognize that on the big picture question of class power, Bill Domhoff’s 1967 analysis remains largely correct.