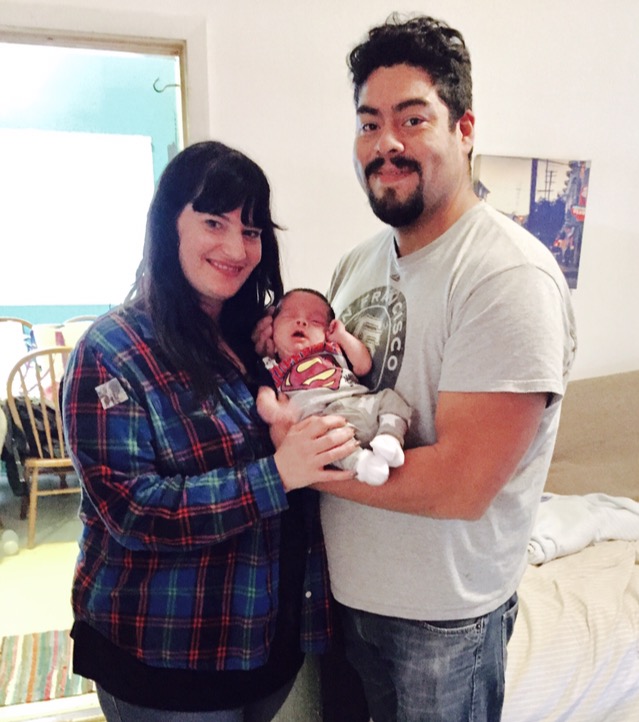 Tenants Rebecca Suval and Juan Carlos Ramirez with their baby

Bad Faith OMIs On the Rise

Juan Carlos Ramirez has lived in his Mission District home for 37- years. Although he and his wife Rebecca Suval are parents to a fragile infant of 2 pounds an 10 ounces born at just 28 weeks, they have also been under owner move-in assault since April 2016. The eviction has truly taken its toll on their mental and physical well-being.

This is part of wide-scale owner move-in (“OMI”) abuses facilitated by the Bornstein law firm and other eviction specialists. In 2016 there were 417 owner move-in / qualified-relative move-in notices filed with the Rent Board. That is up from 343 in 2015. Incredibly, that is also 2.7 times the number of Ellis notices filed in 2016.

As described in the November 11, 2016 NBC report, SF Landlords May Have Wrongfully Evicted Hundreds of Tenants,  there appears wide-spread abuse; supposed owners moving-in cannot be found months after the relevant move-in date.

Opportunity abounds for landlords acting without just cause, as tenants faced with OMI eviction have much less time to establish the landlord’s ulterior motive than a similarly-situated Ellis target who has 120 days, or often, 1 year to prepare. Post-eviction monitoring is difficult to manage and little exists.

Thirty-seven year-old Juan Carlos Ramirez has lived for his entire life at 123 Lexington Street, the upper of a two-unit building located yards away from the now-bustling and stylish Valencia Street corridor.  Juan’s stepmother Juanita, born in Puerto Rico and his father Pablo Ramirez, born in Peru, had settled at 123 Lexington in the 1950’s.  Juanita worked as a nutritionist at Seton Hospital and Pablo worked as a hotel manager. Juan grew-up sharing the apartment with Pablo and Juanita and his brother Pablo, Jr.

Juan recalls that all during the 1980’s Lexington Street was an undesirable location and landlords had difficulty finding reliable tenants. When the crack epidemic hit San Francisco, the Mission District was hit hard and crime rates soared.

Throughout, 123 Lexington remained the home for Juan and his family and the Mission was their community and they were model tenants who always timely paid their rent. The lower unit, 125 Lexington, was consistently rented to 6 or more persons even though it only has one bedroom. Neither landlord Jin Ping Mak nor her husband Yau Jin Mak ever resided at the Lexington premises for the 37 years Juan has been present.

Ultimately, Juan’s parents moved back to their countries of origin and only Juan and his brother Pablo occupied 123 Lexington. In 2102 Juan met the woman that he would marry, Rebecca Suval. They fell in love instantly, became roommates and continued to enjoy the Lexington neighborhood. The landlord recognized Rebecca as the other tenant-in-possession.

Years of Substandard Maintenance and Dangerous Conditions Leading to Fire

In the 2000’s landlord Jin Ping Mak began to rent-out the basement level to multiple persons as she had  divided it into several  cubicle-like rooms. There was no kitchen and bathrooms were makeshift.

The landlord was very hushed about who was renting the basement; apparently she was renting unpermitted units. Juan was concerned about the coming and going of numerous unknown persons in the basement unit and felt that his own unit had become insecure as a result. The landlord also turned a blind eye to maintenance and repairs for many years.

Juan was particularly concerned about the electrical system, which was further encumbered when Jin Ping Mak began renting-out the basement level. Juan could not even operate a high-quality carpet cleaner as it would blow the electrical circuit. Juan complained to the landlord or her son whenever the electricity blew-out due to overload. The landlord ignored the repeated requests, yet she was sure to demand regular increases in the rent.

In December 2015 the basement unit went up in flames. Fire inspectors were called and arrived. There was serious smoke damage and debris that entered the entire building, including Rebecca and Juan’s unit.

Every piece of furniture and clothing owned by Rebecca and Juan reeked of smoke. The landlord refused to remedy the damage. Rebecca and Juan had to finally clean all clothing and sterilize virtually every item in every cabinet in the apartment.

The landlord would not pay this cost. The electricity remained completely out for days. Juan repeatedly asked that the owner remedy the fire damage and replace the carpet that was worn, old and fire-damaged, to no avail.  At this same time Rebecca Suval was suffering from a rare neuropathic condition that originates from a pinched nerve in the brain, which results in severe facial pain. Rebecca would soon have to have brain surgery.

Tenants’ Claim For Basic Maintenance Met With Accusation And Eviction

It  was a very stressful time. Because Rebecca was due to have brain surgery on December 12, 2015 and really needed a calm and cleanly home, Juan redoubled his efforts to get the landlord to address substandard conditions. For three months after the devastating fire, the landlord ignored Juan and Rebecca’s requests to simply bring the premises up to pre-fire condition, bring the electrical system up to code and to replace the filthy 15 year-old carpet. After three months of requests, in March 2016 the only thing the landlord offered was a can of paint, and told Juan to paint-over the effects of the fire damage.

In fact, in response to Juan’s requests, the landlord’s son John Mak, accused Juan of calling the SF Building Inspectors about the condition of the premises. Almost immediately after the accusation and Juan’s requests to make the premise habitable, the landlord in April 2016 served Juan and Rebecca with an owner move-in eviction notice. Tenants believe that their landlord seeks eviction as retaliation.

In the OMI papers prepared by the Bornstein firm it is contended that Jin Pin Mak and her husband live at 125 Lexington. This is an outright falsehood as they never resided there.

It is believed that the landlord was advised to assemble certain bills in their names to feign “home base” at 125 Lexington. In reality, over the years Jin Pin Mak and Yau Jin Mak have listed 135A Lexington, 953 Trail Avenue, Daly City and 707 Capitol Avenue as their addresses, and they have removed Yau Jin Mak from title, apparently for whatever financial purpose or benefits they were seeking to obtain at the moment. Substantial evidence verifies that these landlords did not live at 125 Lexington but have long resided elsewhere.

In May 2016, just after the first set of eviction papers were served, Rebecca and Juan were happy to learn that they were going to have a child, to be born on January 20, 2017. However, the joy felt by Rebecca and Juan was tempered with great fear. The pending OMI eviction caused extreme stress and anxiety. The thought of losing their home just as they are  bringing a child into the world was excruciatingly stressful.

On October 7, 2016, after feeling weak and ill, Rebecca suffered early rupture of the amniotic sac (breaking of her water) for which she was immediately hospitalized. Their child was then born extremely early on October 28, 2016, i.e., at 28 weeks with a dangerously small birth weight of  2 pounds and ten ounces.

From October 28, 2016 until January 4, 2017 the Suval-Ramirez baby was sustained by hospital incubator, connected to a C-Pap and feeding tube. After weeks of touch-and-go as to the vitality of their baby, on January 4, 2017 Rebeca and Juan were able to celebrate the bringing of their child home. This was certainly a monumental step as for many weeks Rebecca and Juan could not even hold their child due to his fragile state. Their baby remains fragile and weak and it is unclear whether their child will achieve normal growth and development.

In the first eviction attempt in April 2016 the landlord failed to give the current version of the notice of certain protections for tenants and failed to notify the rent board of the tenants’ claim to additional relocation benefits due under the Rent Ordinance. The Superior Court dismissed the landlord’s case.  In the second eviction attempt, the landlord failed to file certain required documents with the Rent Board.  On November 14, 2016 the Bornstein firm abandoned the second OMI effort. On November 18, 2016 the landlord sought to serve yet a third 60-day OMI eviction notice, and that matter is now pending.

For almost a year now, following a devastating fire, due to landlord negligence, Rebecca Suval and Juan Ramirez have been under the threat of a bad faith eviction. This has truly taken its toll on these tenants and the well-being of their fragile child. These tenants intend pursue all redress that is legally available.

Stephen P. Booth is an attorney at the Tenderloin Housing Clinic who represents Rebecca Suval and Juan Carlos Ramirez.